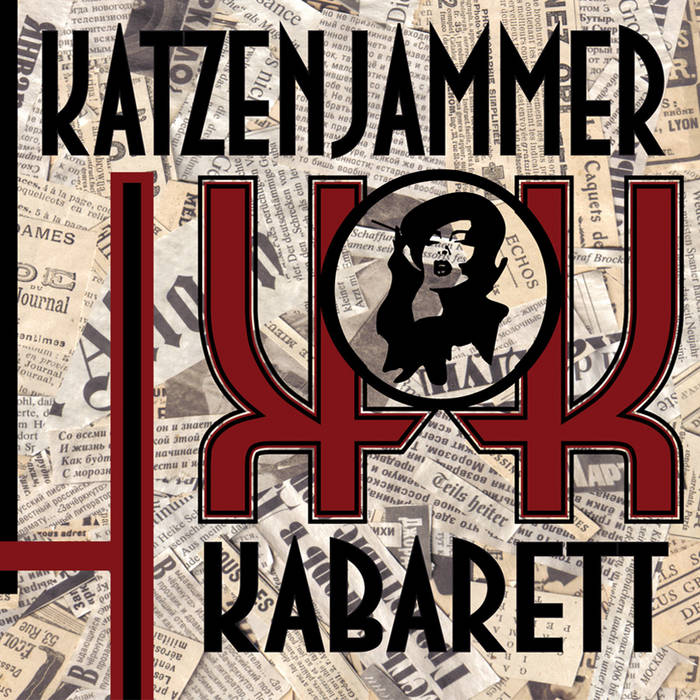 Their 2006 debut. Referring to themselves as “Deathrock Cabaret,” they might be more correctly classified as post-punk cabaret, for their influences can be found in styles from deathrock, baroque, new-wave, electronic to classical. This Parisian act is fronted by the charming, seductive Mary Komplikated.

Katzenjammer Kabarett is a young and promising band from Paris, consisting of Mary Komplikated, Herr Katz, Klischee and Mr Guillotine. Indeed, the idea of the cabaret as they conceive it, must be linked to the conception the founders of the Cabaret Voltaire, or of other European artistic avant-garde cabarets of the 1910s-1920s. Their compositions, by the means of varied and various collages, are an attempt to reveal the peculiar atmosphere one could have found in early avant-garde circles. To sum up, a considerable part of their work comes from second-hand elements, borrowed from preceding movements and styles, but whose signs have been systematically changed.

Thus, the music composed by Klischee, supported by Herr Katz's lyrics and Mr Guillotine's how so necessary pragmatism, creates an alchemy with the carefree Mary Komplikated's voice and theatrical singing which embodies all the magic, the cynism and the absurdity of that hangover cabaret.


A review from Liar Society:
Katzenjammer Kabarett doesn't transcend genres so much as explode them wholesale. Musically, the group mixes cabaret, deathrock, synthpunk, and goth conventions with cockeyed abandon—post-punk guitar tones, Weimar-inspired piano, and Euro-electro sythesizers all manage to find a place in the sonic palette. Ideologically, Katzenjammer Kabarett borrows their aesthetic ideas from a similarly diverse body of artistic thought—Dadaism, fin de siecle Decadence, Futurism, Symbolism, and post-modernism all seem to have left their mark on the band's two albums. On their self-titled debut and the recently released Grand Guignol & Varietes, the group picks up the wild brand of dark experimentalism initiated by Andi Sexgang and runs wild with it, bending that particular avenue of rhizomatic freakishness to the beat of their own (prefab) drummer. Of the many new acts who are picking up on the old-school Bat Cave tricks of the past, Katzenjammer Kabarett are one of the few bands that move beyond homage or pastiche—everything old is new again with these Katzenjammer Kids. Arty, weird, and brilliant.