In A Place Of Mutual Understanding

by Stratosphere With Dirk Serries 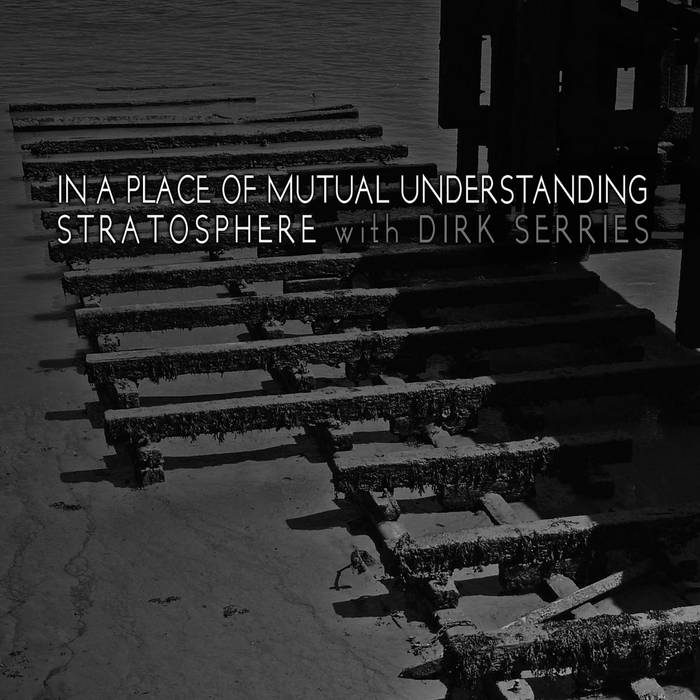 rikm A beautiful flow of sound runs through this entire album, the feeling of tides and gravity and a soft drift that envelops and caresses the listener. This is a beautiful release, highly recommended.

Brian Bourassa Like a gentle, yet unsettled nature of darkness. Deep and thick with a foreboding presence. Despite all this, it's drone-like sound is oddly comforting.

An exchange of sound between Stratosphere (aka Ronald Mariën, Dirk Serries’ longtime soundtechnician) and Dirk Serries (VidnaObmana, FearFallsBurning, Microphonics, 3 Seconds Of Air, The Sleep Of Reason, Continuum). Drawing from genres like post-rock, shoegaze ambient, and drone music, In A Place Of Mutual Understanding beautifully blends all these style into a collection that is atmospheric, harmonic, dynamic and even dramatic. Created with electric guitars and basses – and featuring an ethereal guest vocal appearance by Martina Verhoeven – these pieces build waves of guitar patterns and textural washes, heavy stabs, and peeling figures into a stirring moodscape that’s as uplifting as it is beautiful.

Vital Weekly’s review of Stratosphere’s Dreamscape album:
“While still involved in atmospheric music, guitars are fed through a bunch of guitar pedals and it sounds louder and darker than before. Despite the somewhat darker undercurrents of this album, there is still hope somewhere through gentle melodies singing, humming over the a black sea of drone like sounds. From the pure form of ambient music to the post rock variation of it, not the biggest move in the world but surely a nice one and great to see him back on track. Let’s hope for some more.”

Stratosphere BIO:
In the early 90’s Ronald Mariën solo-project, Stratosphere, began experimenting with music. Using analog tape devices combined with synth sounds, the first songs were created. After these first steps, audio recordings were added that complemented and defined the typical Stratosphere feel. Spheric soundcapes with harmonic melodies became the signature sound of Stratosphere. This resulted in a few releases in the next years together with some live performances. Feeding on these experiences, more acoustic instruments (including guitar) were added which created an even more harmonic sound. After a decade of silence, and a dramatic change in life, Stratosphere picked up music again in 2009. Using his experience as a sound and recording engineer, his interest in music creation returned. This time, only guitar and bass guitar were used, in combination with a wide range of pedal effects. Simplifying his working method, resulted in an number of new tracks. Due to the changes in life, a darker side is introduced, but the typical sound remains. Soundscapes and harmonics are still the base of his music. So a new era has started for Stratosphere returning to the music scene with a fresh view and renewed motivation. After his 1986 3″CD ep The Introspective Spaces on the Italian Amplexus label, Stratosphere returned in 2012 with his first full-length album Dreamscape on the French Label, Basses Frequences.

Dirk Serries BIO
Since his first releases in the early 80s, uncompromising Belgian artist Dirk Serries has garnered respect from and invitations to collaborate with recognised musicians like Steven Wilson, Steve Von Till, Justin Broadrick, Cult Of Luna and Alan Sparhawk of Low. He has been commisioned to write works for Dutch national television broadcaster VPRO, the Antwerp Zoo as well as architectural festival Biënnale Rotterdam and worked on stage with the Holland Symfonia orchestra. His discography encompasses stylistically diverse releases on labels like Relapse, Projekt, Conspiracy as well as his current creative partner Tonefloat (a label with years of experience in vinyl editions for acts like Porcupine Tree, Robert Fripp, Theo Travis and Anja Garbarek.) Over the past thirty years, he has toured extensively through Europe and the USA and performed at some of experimental music’s major venues and concert spaces.

After bringing his projects vidnaObmana (1984-2005) and Fear Falls Burning (2005-2012) to a satisfying conclusion, Serries no longer considers it necessary to hide behind alter egos. Confident enough to operate under his own name, he is continuing his ongoing search for uncharted territory while keeping in mind the essence which made him want to work with sound in the first place. Fascinated by the power of purity, he has built a reputation for building a personal galaxy of harmony and dissonance through dense caleidoscopes of slowly unfolding motives. His upcoming second microphonics-album is a further refinement of this approach. Eschewing stereotypical genre exercises, Serries refuses to be labeled as a guitarist, weilding his instrument in a way which never denies its original tonal colours while bringing out the unique intimacy of his music.