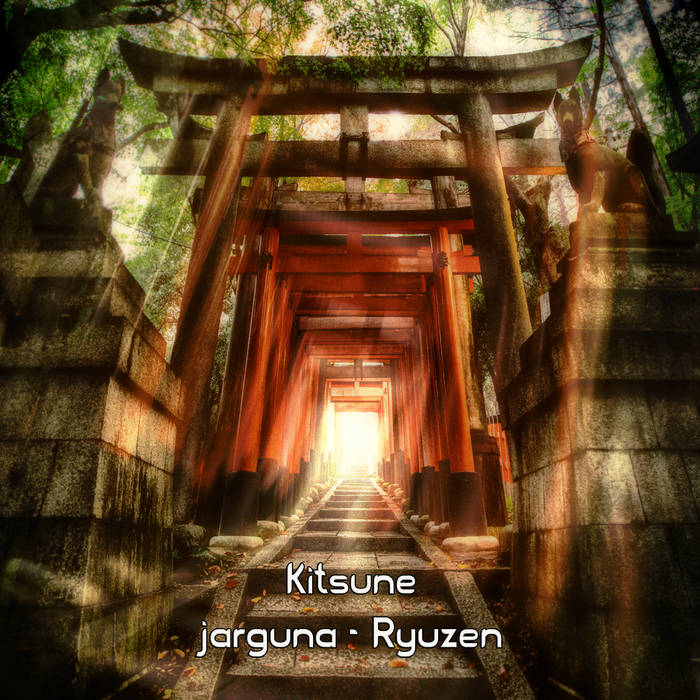 darkgaze This is an awesome collaboration Favorite track: Kitsune, and the Valley of the Wolves.

“Being born in Japan,” Ryuzen reflects,”the shakuhachi’s deep woven presence in culture was very attractive for me. Meditation has always been a part of my life, and shakuhachi’s roots are connected with the zen tradition which fulfills another facet of my being. I have a passion for wind and stringed instruments as well as electronic music. I was impressed by jarguna’s sensitivity to subtle atmospheres and the way in which he places the shakuhachi in these electronic, long-form, glacial textural sonic meditations.”

KITSUNE’s themes are derived from the legends and mythologies that still permeate the beliefs of the Japanese people, that is, Inari, i.e. divinity as a generic term, or rather O-inari. The term kitsune refers to a Japanese fox spirit, normally female, said to have powers such as shape-shifting, and whose power is symbolized by an increase in the number of tails. Kitsune are guardians of Shinto shrines, protecting from evil entities. The atmosphere of the music is shrouded in mystery, mixed with surprises from the unknown; the two artists create a satisfying sense of peace.

With this release I celebrate my fortieth album, a simple stage that marks only a number, but looking back at my discography I do not see only music albums. Behind those covers are numerous efforts, research and a lot of time dedicated to introspective exploration through sound. The theme of every project is a truly important thing to me, and this new album once again reflects that.

Thanks to Alcvin Ramos aka Ryuzen, Japanese-born master builder of shakuhachi, a common desire has taken shape to blend sounds deeply linked to a secular tradition with modern sound structures through my syntheses, loops, auditory sculptures.

My wish was that Ryuzen could express himself freely with his flutes and shikin, a chordophone (lute) and a shamisen, similar to a banjo.

Almost always the shakuhachi is an instrument played alone, never as an accompaniment. He is the protagonist, he is the one who must tell the story. I have only tried to accompany this important instrument in the wandering of the psyche with floating plots and atavistic drones. My sound structures are colored fields or forests that serve as a background where the protagonist of the image can be placed in the picture (metaphorically speaking).

Sharp sounds like the wind that hurls itself on the reeds, hisses of fronds among conifers, an invisible entity animates a landscape making it dance softly or shake violently, an instrument so sweet apparently as the shakuhachi can emit such aggressive and energetic sounds suitable for awakening experiences buried in the unconscious.

I am truly grateful to have explored my soul thanks to the flutes of Ryuzen, a dear friend whose work encourages me to confront myself. I hope one day to be able to go to Japan with him to deepen my knowledge of this fabulous country full of traditions and contrasts.

Marco (jarguna) reached out to me some years ago. I was immediately impressed by his sensitivity to subtle atmospheres as well as the quality and prodigiousness of his musical productions. Last year he invited me to be a part of the Chimera collaboration album during the height of the pandemic, and I was moved even more by his composition and production skills. Afterwards, we discussed doing an album together.

Japan is a wonderous country which has gifted me not only with life but great inspiration and fascination for sound and art. All the instruments I play on this album (shakuhachi, shinkin, shamisen, and tenkan) stem from my connection to Japan which I am so grateful for.

KITSUNE is dedicated to O-inari Kamisama. She is a very popular figure of worship in Japan since ancient times. The representative animal of O-inari is the fox (kitsune) which according to mythology can sometimes take the shape of humans. They are helpers and healers of humans, and there are many pilgrimage routes throughout Japan dedicated to O-inari Kami. The beautiful thing about O-inari worship is the flexibility for individual interpretation about what O-inari symbolizes and how to practice pilgrimage. This is quite similar to the practice of solo shakuhachi meditation music (hon-kyoku). Once you learn the basic blowing, movements, and patterns of playing (kata), you’re free to interpret it as you feel. It’s never the same; it’s always changing depending on the mood, physical condition, and environmental effect upon the player.

We work to capture a beautiful, mysterious, Japan-inspired atmosphere for you to meditate and engage your deeper self. Working with Marco is a dream realized. He is the kind of electronic musician I would like to become if my path is meant to be such a musician. I am very grateful that we have met and become friends through this project.