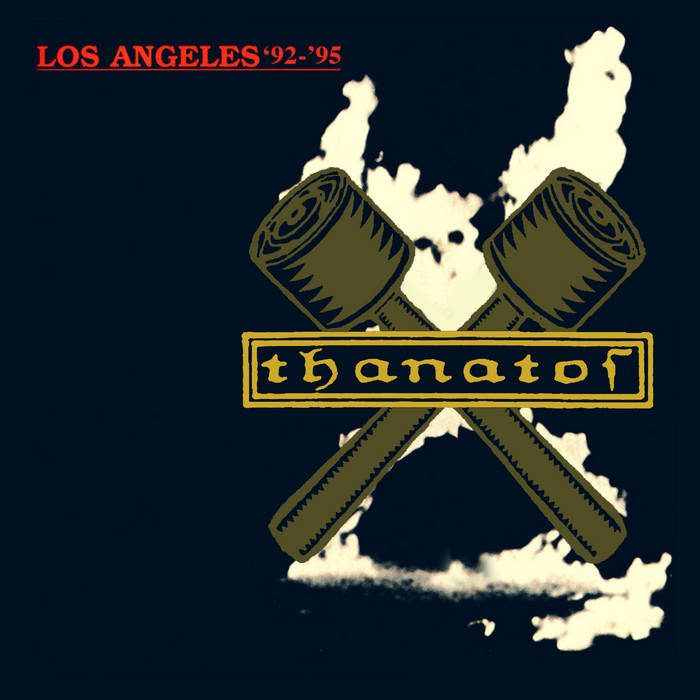 A few weeks ago, I thought I’d compile together the cover songs Thanatos recorded in the early 90s for our first two albums. In the process, I realized that our KC & the Sunshine Band track was never released digitally, and our DEVO cover is buried in an 18 minute bonus track at the end of the first CD.

While compiling these tracks together, I thought back to that era when I lived in Eagle Rock, near Pasadena in Los Angeles. And Boom! I thought that would be a good name for this ep, LOS ANGELES to tie into our new album PORTLAND. Then I immediately thought of the X album, LOS ANGELES, and created an homage to their cover using the World War I hand grenades that were the unofficial Thanatos band logo back in those days.

The first three tracks are pretty weird; while our cover of Body Count’s “Cop Killer” is the most listened to Thanatos song on YouTube. Originally we merged Bruce Springsteen’s “Highway Patrolman” with “Cop Killer,” but the Boss’ people told us, “Um not a chance in hell, guys!” Which is why Pat rags on Bruce in the lyrics. “Spanish Bombs” and “Death of an Angel” are quite pleasant. A little for everyone.

We’ve got the new album on preOrder/crowdfunding on Bandcamp. We’re chugging along to the goal. Pick up a CD, Tshirt, download, poster or more…. projektrecords.bandcamp.com/album/thanatos-portland

"That's the way" has never been available digitally (it was on FROM ACROSS THIS GRAY LAND NO 3). "Jocko Homo" & "Don't Fear The Reaper" were on their debut THIS ENDLESS NIGHT INSIDE, the next three were on 1997's AN EMBASSY TO GAIUS.