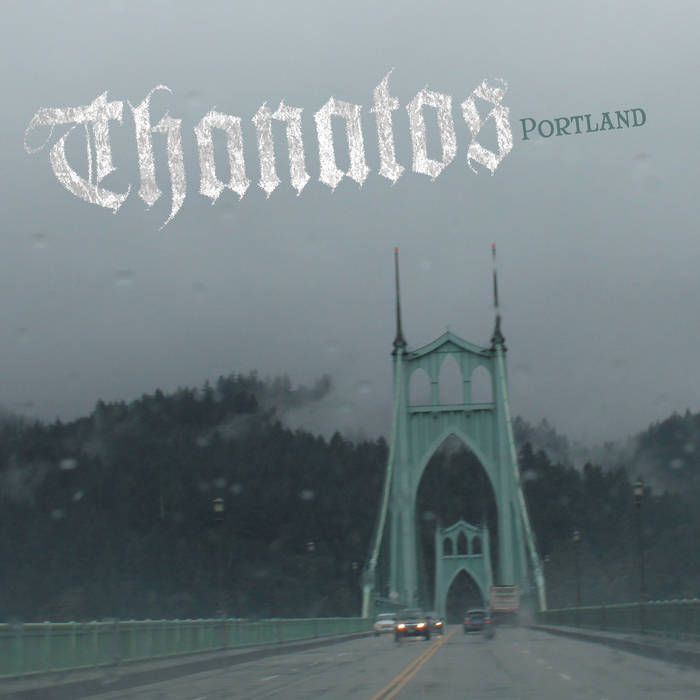 Lee-Eric Patrick's and Sam's reunion shines. Portland is the best gloomiest album of 2020. During this moment of earthy crisis Portland washes all of my hurt away. Favorite track: Dazzling.

It’s as if time stopped for… I don’t know… 25 years? Portland sounds like it was released at the end of the 90’s, as if Pat and Sam never stopped working together. Fans of This Endless Night Inside or An Embassy to Gaius-era Thanatos are hard-pressed to believe this record is brand new and evolved after such a long pause. What gives it away is a few different tones — there’s still melancholy but in a happy way, like good memories and things lost but always remembered and treasured. Poignant lyrics are delivered sometimes forcefully and at other times with a gentle caress over a sublime backdrop. The simplicity of Pat’s guitar and voice and Sam’s electronics creates an ethereal mood — soothing and captivating. Included are Thanatos’ infamous cover songs: this outing highlights The National’s “Bloodbuzz Ohio,” The Velvet Underground’s “I’ll Be Your Mirror,” John Cale’s “Half Past France,” and Tanita Tikaram’s “Cathedral Song.”


Portland transcends this gloomy year of earthly crisis and shines a light into our panic-stricken eyes. For this moment, it washes all our hopelessness away.

”Thanatos creator Padraic Ogl strips down his sound even further leaving only gleaming bleached bones. Few artists can create such compelling atmospheres with vocals and acoustic guitar alone aided only by the occasional electronics from black tape for a blue girl’s Sam Rosenthal. But Ogl does this with ease, exposing a subtle beauty, leaving the lyrics to glitter in the pale light.” – Jo-Ann Greene Alternative Press

🏮Reflections on the recording of Portland 🏮

Pat comments, “This may be the best, certainly the most mature and cohesive, record we put out. Don't get me wrong, I love those early records and I am incredibly proud of them. This album moves forward. I’ve always felt musicians are like sharks; we die if we don't keep moving forward.”

“It’s like a seamless continuation,” Sam adds. “The last time we recorded together was a couple tracks for THE NEIGHBOR OF THE BEAST ep, 23 years ago. We hadn't done a full album since EMBASSY, which was recorded in '95. With Pat out here in Portland to record, it felt like we were back in California working together naturally as if decades hadn’t slipped by since our last collaboration. Just like being in Pasadena….

“It’s a lot less hot in Portland,” Pat interjects. “Sam and I talked about doing some new music with the idea to do it like when we first recorded back in the stone ages…. chiseling out our songs on rock... and riding the tablets between each other on our dinosaurs.”

“The dinosaurs grew old and lazy,” Sam ruefully reflects, “So we had to step into the modern era. Pat took an airplane out to Portla…”

“…to record with me in my studio. The initial idea, at least from what Pat reminds me, was to do the same sort of songwriting as on the first two Thanatos albums. Pat had a musical idea of the song’s structure, we hash it out a bit in person, and then record the song in as few takes as possible. After Pat’s guitar and vocals were finished, I’d add my synth parts while Pat rummaged through his notebook preparing on the next song, and adding helpful, ‘Sure, yeah, that sounds good!’ “

“Sam and I haven’t made a record together for 25 years,” Pat comments, “And no, it isn’t because we hate each other like the guys from Oasis (or for you older folks maybe… The Everley Brothers). We haven't done anything together because we don't live in the same city and it costs money to get together and do it. Your preorders here enable us to release this album. And honestly, possibly to encourage us to work together again.”

“Back in the old days,” Pat continues, “The songs we worked on were built on lyrics one of us had written before ever getting together to record. I’d take Sam’s words (or mine) and work them into songs. That’s the way I did it on Portland. In one instance, I found some 30-plus year old lyrics I wrote and turned them into songs. On some that Sam wrote, he gave me a stack of words he had written during the last year and told me to have at it, and form them into something new. I did much more slicing and dicing with his lyrics, mostly to get them to fit into the music I was writing. This led to us in the studio, discussing what the songs MEANT…”

“… Most of Pat’s edits were brilliant, he made them into something. But at times I would disagree with a word or an idea, as it didn’t seem to be what I wanted to say….”

“That was interesting to me.” Pat continues. "I am sitting there with the guy who wrote the words going back and forth about what they meant!... DUH!… Obviously HE knows what they meant, but I had rearranged them and they may mean something different to me. Personally I think it adds depth to the songs and the lyrics, to go about it this way.”

“An interesting thing about this record (and the first Thanatos record) is we split writing the words; some lyrics Sam wrote, some I did. But when I think about songs like ‘The Wait Smothers Me’ or ‘Shadowed Sky Now Settled’? My brain THINKS I wrote the words. I identify with those songs so much and it isn’t just because I’ve played them a hundred times each.”

This is Sam’s 13th crowdfunding campaign, and Pat’s 5th. Crowdfunding is the way we raise the money to create our albums in the modern version of the music industry. Crowdfunding is a wonderful connection we make with people who love our art. It reintroduces us to fans from back-in-the-day; and it’s great chatting with you and hearing your experiences with our music.

We snagged 50 "KEEP PORTLAND WEIRD" bumper stickers from our friends at Portland Oregon's best record store, Music Millennium. musicmillennium.com They went to the first 50 people that crowdfunded a physical copy of the album.