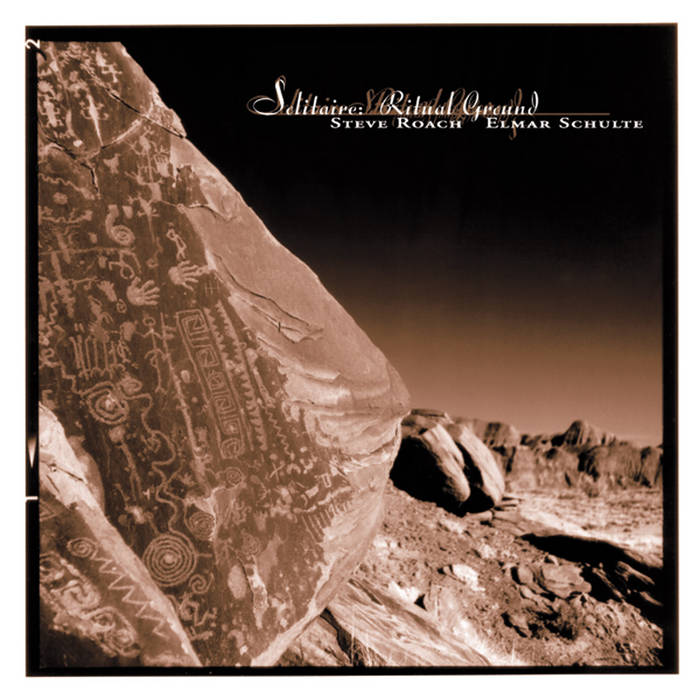 RITUAL GROUND is a spontaneous sonic combustion, rich in cinematic overtones, deep atmospheres and tribal-electronic grooves. Previously released in 1993 on San Francisco's now defunct Silent label -- and featured in the musical score of the Michael Mann film, Heat -- RITUAL GROUND is a lost classic tribal-ambient gem, reissued on Projekt in 2000. And added here to Bandcamp in 2015.

European audiences have always been ahead of the curve in their appreciation of electronic music. So it's no surprise that, while touring Europe in 1993, Steve Roach was spurred into an instant collaboration with German synthesist, Elmar Schulte. Like some would exchange ideas over a beer at a bistro, Roach and Schulte made haste to a recording studio and let their music do the talking.

Roach teamed with Schulte at a time when he was producing astonishing solo albums like WORLD'S EDGE, ORIGINS, and ARTIFACTS, and mesmerizing hybrids in collaboration with Robert Rich, Jorge Reyes and Suso Saiz. Roach's music is unstoppable in its evolutionary development and remains forever fresh and vital, but RITUAL GROUND represents that period in time when tribal elements became a gripping quotient in the ambient equation. The rhythmic power of tribal music and the warm chill of deep space music combine here to access spiritual caverns with sublime emotional resonance.

In its original release from the now-defunct Silent Records, the album was easily missed, due to the fact that neither artist's name appeared anywhere on the outer packaging. But enjoy it now, like the unearthed masterpiece that it is.

Steve Roach's musical explorations have taken him into many different realms, always touching a primal nerve and evoking brilliant mindscapes for the listener. A respected and much followed solo artist, Roach has also embarked on many collaborations in which the interplay between musicians nourishes the creative process. RITUAL GROUND is the result of one of those instrumental partnerships.

In 1993, Roach went to Europe for his first series of concerts outside the United States. While there, he met German synthesizer artist Elmar Schulte, whose own work has appeared on several different European labels. Spurred by their mutual desire to create new, tribal music, Roach and Schulte immediately booked studio time. The result of their intensive meeting of musical minds was this album.