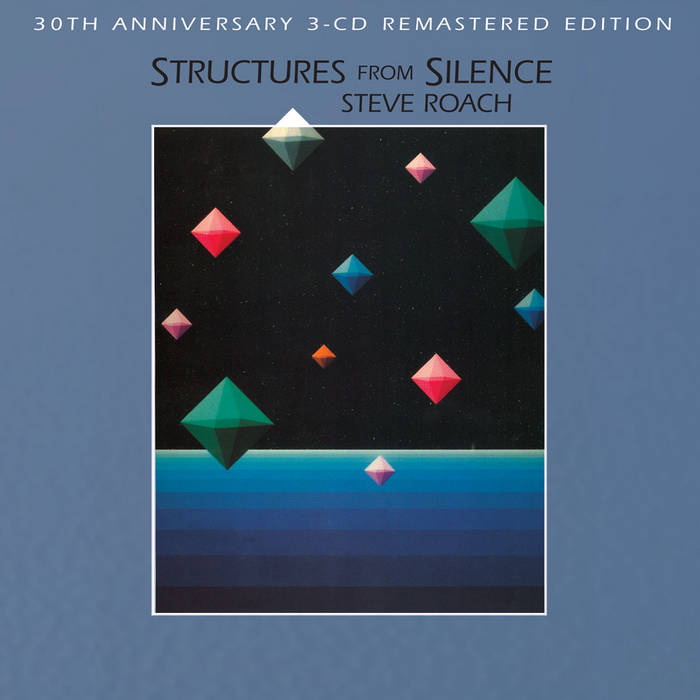 Jo This was a splurge for me on here at $20, but totally worth it. Gentle, calming tones bring me peace in anxiety. Favorite track: Quiet Friend.

Demonic Sweaters This is the most I've ever paid for a single digital release, but it's totally worth it. I had no idea there was an extended version, so I was really thrilled to get it! This is hands down my favorite ambient release of all time as well as one of my favorite albums of all time. This remaster sounds incredible and so worth the money. Favorite track: Quiet Friend.
more...


Structures From Silence's breathing, suspended embrace of atmospheres and serene melodies instantly struck a chord with listeners in 1984; the album continues to reiterate its timeless resonations with new listeners today.

In 1983, as Steve Roach began work on his third album, the dedication to finding his voice as a composer and artist was coming into full bloom. On this landmark recording of gentle proportions, he emerged with a sound completely outside of the 80s era in which it was created. The three long-form tracks on Structures From Silence were the birth of something new; it was an original and pure statement, a dramatic departure from his earlier works in the German-influenced electronic space music genre. Striking a balance between diaphanous and gentle, deep and reflective, the listening experience evoked a sense of silence within the music as well as the space between the chords. It expresses the breath of life and offers a meditation on delicate strands of subtle awareness.

During its creation, Steve let the music take form in moments of focused stillness within the studio. At the time of the recording, Steve wrote, "I spent much time in silence, a beautiful place. Feeling the sound move through that space was vital in its development... For me the essence of the music is what is felt when it ends, a returning to the silence."

"Like riding the perfect wave in slow motion . . . as if sculpting liquid, Roach carefully shapes his sounds into a stately crescendo for an eternal dawn." - John Diliberto, Echoes Radio.

"Structures From Silence remains one of the most important ambient albums ever crafted.... its enduring influence has been unmistakably visible in the three decades since its release. It has never been more relevant." - FACTmag

Thirty years later, Structures From Silence remains an iconic American release in the ambient and electronic genres. It's a well-respected soundtracks for contemplation, relaxation, meditation, and focused creativity. The album continues to appear at the top of charts and is mentioned as one of the best releases in the genre; even more importantly, it is a meaningful touchstone for thousands upon thousands of listeners who have lived many years within its nurturing embrace. The album has endured, growing more potent over time, especially in the accelerated pace of today's life. Emotional, powerful, and enriching, it is a living example of the true healing quality that music can hold.

For Structures' 30th anniversary, Steve went back to the original analog mixes for a 24/96k remaster that reveals luscious quality and subtle tonal detail not heard since the 1984 master.

"With today's evolution of audiophile analog mastering tools," Steve says, "we were able to reveal the original beauty, detail and essence-of-tone captured on the 30 ips analog master which has not been heard like this until now."

The 3-CD deluxe edition includes two bonus discs created in 2013. Steve says, "Over the years since the creation of Structures From Silence, certain pieces would emerge in the studio that instantly had the resonance of a direct relationship to the place that birthed this work back in 1984. As this anniversary approached - like the light slowing emerging in an early morning sunrise returning from a thirty year orbit - the desire to draw from this place of stillness, and deep inner quiet became the soul tone for these new pieces. Like the three original tracks, these were created in moments spent simply being present in the studio, tapping the flow state and guiding this sense into these recorded moments."

"Since its release, many listeners have praised the album's therapeutic and meditative qualities, but Structures From Silence remains foremost a work of the heart, with tracks like 'Quiet Friend' forever evoking an aura of melancholic solitude. Whatever Brian Eno may have set in motion with his landmark Ambient series, Roach took a step further by creating something with a resounding sense of humanity and emotion." - Mark Burby, Alternative Press

"Heralded by many as one of the finest ambient works of all time, Steve Roach's Structures From Silence is right up there with Brian Eno's Music for Airports, and deservedly so. Originally released in 1984, Structures was deemed a classic almost immediately." - All Music Guide, Matt Borghi

With the 1-CD remastered edition and the 3-CD deluxe remastered edition (both presented with the original cover art), Projekt gives listeners the chance to discover and rediscover this timeless album. With a beautiful new audio transfer that perfectly reveals the silence within, this release sets the tone for the next 30 years of silence.

• 24/96K remaster from original analog tapes
•Luscious sound quality and subtle tonal detail not heard since the 1984 master
Includes two bonus discs created from the heart of silence in 2014
•Structures consistantly tops ambient / meditation listener polls
•Yoga Journal voted Structures one of the top-10 all time CDs for yoga. The ultimate soundtracks for contemplation, relaxation, meditation, & focused creativity
•In 2013, FACTmag.com chose Structures From Silence as the 10th best album of the 80s

The breathing suspended embrace of atmospheres and serene melodies on this breakthrough release introduced a new sound for its time. Structures From Silence is a living example of the true healing quality that music can hold. Now Projekt gives you the chance to rediscover this timeless music, with this 30th anniversary package including two additional discs of music.

Note: If you are looking to purchase the 24-bit/96k High Definition Studio Master, the remastered original album (disc 1 of this set) is available at: spottedpeccary.com/shop/structures/