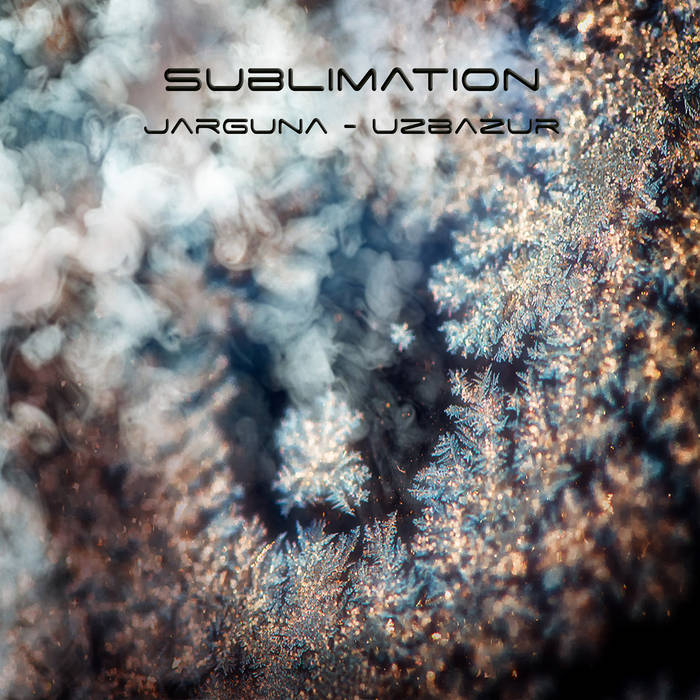 The moment just before and after the condensation transforms the panorama into an abstract painting. The intent is to generate layered textures of apparently decomposed sounds, just like being inside a laboratory full of reactions or perhaps soundtracks for cramped cellars. The creation was a continuous evolution of experiments with sounds, filters, bells and various recordings of real instruments and syntheses. The result is a calm and relaxing atmosphere suitable for elevating the spirit and bringing the listener to dissolve with sounds as vapor does in contact with air.

I have always been fascinated by chemical reactions, especially biological ones, since I follow medicines in general, but here we have entered something magical, very fascinated by what nature produces. The ancient alchemy tried to refine and transform the materials, even if it was often an initiatory and esoteric path, sometimes spiritual, made up of symbols and encrypted words, since in those times there was the inquisition, and if one came out of Christian current you were directly burned at the stake.

The meeting, for some time now with Simone Santarsiero, aka Uzbazur, is now dated to 2012, consolidated by a beautiful collaboration entitled Oscure Presenze, a long and obscure album, as is usual for this artist, but in this case I made myself attracting from some sounds that Simone generated, crystalline, similar to glass, metallic, liquid and at the same time, it is from there that the idea of ​​exploring one of the most fascinating reactions of this world, sublimation, was born.

In chemistry, sublimation refers to the passage of a body from the solid state to the gaseous state without passing through the liquid state; this transformation takes place with the acquisition of heat and is therefore an endothermic process.

Yet as strange as this reaction is that some materials such as camphor, mothballs, but also pure elements such as iodine can do it, sublimation is not so rare to be found in nature, since even water changes, that is, from ice to steam. and vice versa, even if the latter is called frosting.

The sounds to express and interpret this concept are similar to steam or the crackling of ice, so we used noise, recorded all sorts of mechanisms or natural situations that came to mind, the ice when it splits, the wind rustling through the leaves, rhythms rich in effect, sometimes almost distorted or grainy with glitch effects. The syntheses have been processed several times in order to give a “creased” effect and the sounds of natural origin mix with the synthesis.

Traces that follow one another between chiming bells and glassy mantras, it is like seeing the view behind a window, which crystallizes due to the vapor that settles on the glass and the cold, forming a texture of ice that distorts the image that you could see just before and moment after the condensation transforms the panorama into an abstract painting.

In the course of the album, some phases of the sounds recall the Anatêxis album, where also here I interpreted chemical reactions, but aimed at rocks, “Alchemical Room” is the most representative track and perhaps the most complicated track created by juxtaposition of acoustic and synthesis, perhaps also the fulcrum track of the entire album, even if the song “Sublimation” (track 02) and “Black Vapor” are the most musical ones, the intent is to generate layered textures of apparently decomposed sounds, just like imagining being inside a laboratory full of reactions . In some moments he also has a vague memory of Oscure Presenze that thanks to Simone we have created soundtracks for cramped cellars.

At least for my part, music has become an excellent means of expressing concepts that words do not always find the right explanation or are limited by, transforming an art into expression to encode realities beyond the cognitive scheme.

Working on this album has been a continuous evolution of experiments with sounds, filters, bells and various recordings of real instruments and syntheses, to create a calm and relaxing atmosphere suitable for elevating the spirit and relaxing the listener as much as possible, bringing him to dissolve with sounds as vapor does in contact with air.

Marco and I met after a long time, several times he came to visit me at home to discuss the album composition techniques, exchanging ideas and various suggestions on which samples to use, how to structure the various tracks, the cover and other various details that make up and complete the album.

When I was a child when I went to middle school, a lady who talked about Alchemy came to visit us, took some stones and with herbs and various “magic” formulas she told us that she would turn those little stones into Gold, I remember that we had a lot of fun in the process of experimentation, the small stones at the end of the tincture in various herbs had a very nice smell that tasted of wood and nature and were slightly golden colored on each side.

Then with the progress of time together with some friends I discovered Full Metal Alchimist a Japanese Anime structured and set in a reality where alchemy was a fundamental part of the spiritual and magical evolution of each character.