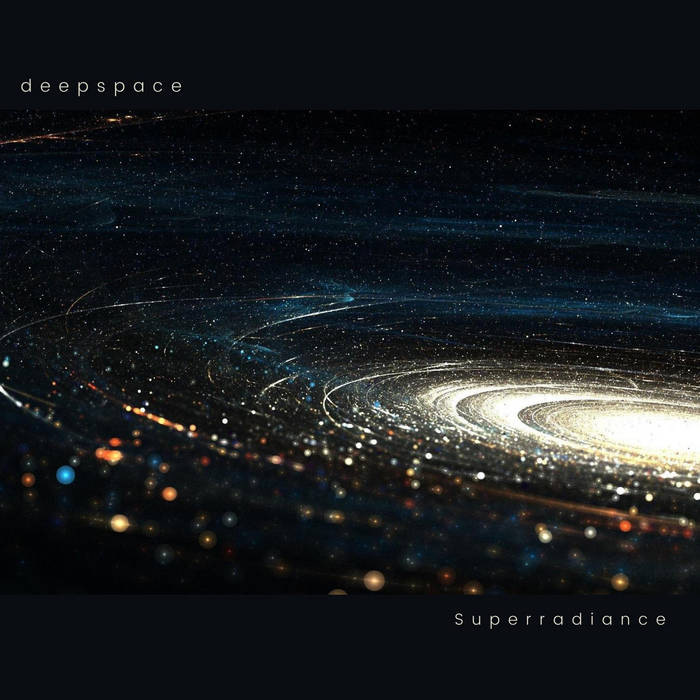 Paul Brandon Sublime album from one of the most consistently brilliant composers around at the moment. It exists without being obtrusive, but at the same time you are very aware of everything going on, like the low thrum of a city at midnight. Just beautiful. Favorite track: Leaving Earth.

Dave Aftandilian I have long loved space ambient, so of course I am a fan of Deepspace’s new release. On this peaceful and resonant journey through the universe, it is the stark brightness that strikes me most: the shimmering of stars floating atop the cosmic ocean’s waves, pulsing their cryptic, particular messages into the void. Next I feel a sense of floating in vast, inexplicably warm interstellar waters, gently enfolded and buoyed as I gaze in wonder at the laughing multicolored beings all around me.

“Space music fans as well as aficionados of imaginative soundscape ambient will want to dig this beautifully made recording 100%.” – sonicimmersion.org

"With SUPERRADIANCE, Deepspace has released his first ambient release on the Projekt label, a beautiful slab of gentle floating ambient electronics that coats the listeners’ spirit with subtle power and grace. If one is looking for a floating passage through soft waves and sparkling stars on your path to slumber, SUPERRADIANCE is your ticket." - Expose.org

SUPERRADIANCE is the dazzling 12th studio album by star-faring Australian electronic musician Deepspace and his first on Projekt Records. It is dream-like electronic ambient music with glittering, minimal melodic and harmonic expanses impressionistically cast as sonic light, appearing and disappearing as it overlaps to form new hues that shimmer, interact and then vanish.

The album is a conceptual expedition through the heavens. The listener’s ideas about space and our species’ journey inform the narrative detail with tantalizing clues subtly guiding the experience. Polygraphic wildlife, Venusian orchids, leaving Earth, microbial lifeforms, these evocative ideas and titles are meant as prompts: an image, a feeling that activates the listener’s own odyssey.

The intermingling of science and art hold sway over the conceptual and stylistic elements of SUPERRADIANCE. Serene and futuristic scenarios wash over the listener beckoning them onward into the “sky inside the mind” — their own imagination. Influences include Brian Eno and Steve Roach as well as art music composers such as Claude Debussy and Francis Poulenc appearing as an influence in some of the harmony and the ephemeral and somehow proudly introverted nature of the musical parts.

Deepspace is Brisbane, Australia-based ambient musician Mirko Ruckels. His hypnotic, glacial, dreamy and atmospheric work is created with various synthesisers, software and acoustic instruments such as bells, guitars and piano. When he was a little boy in Germany (he is German/French) he would slip into a reverie at hearing a distant lawn mower, church bells, passing planes, or the rumblings of far-off trains. This love of drones and ambient sound led to a wonderful moment upon discovering there are other like-minded artists and listeners who also enjoyed atmospheric environments that evoke liminal moods and spaces. Ruckels discovered THE RIVER OF APPEARANCE by vidnaObmana and became obsessed with the strange slow, sun-filled expanses that defied conventional harmony, arrangement and instrumentation. Later, STRUCTURES FROM SILENCE by Steve Roach was the next piece in the puzzle which inspired him to explore and create his own music. He says “I literally had no idea how to make ambient music and just felt my way in the dark.” In 2006, Deepspace was born. Themes range from macro — such as space, underwater, deserts and science fiction imaginings, to micro — internal states and microscopic life.

Deepspace has released eleven albums, ten independently and THE GLITTERING DOMAIN (2009) through American label Hypnos. He has two 2021 collaborations with theAdelaidean ADRIFT and ANTIGRAVITY, both on Projekt Records.