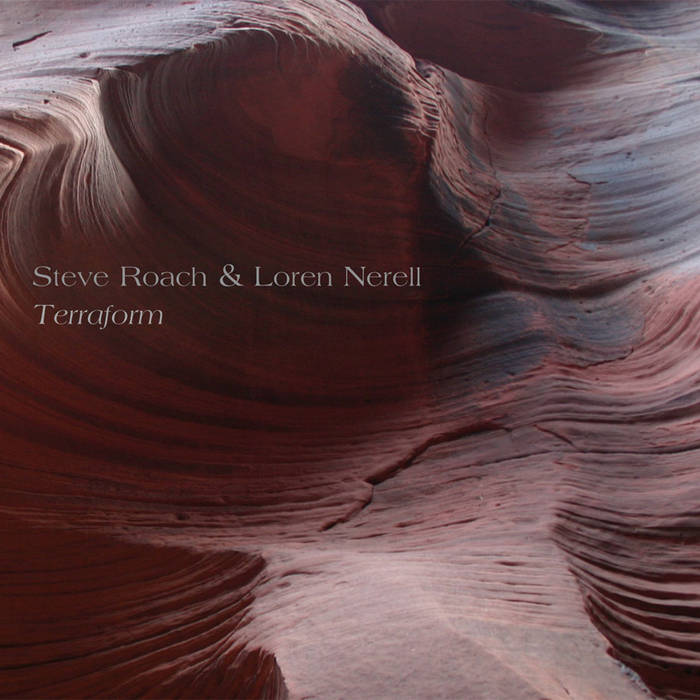 rikm An inspired collaboration between two exceptional artists, who craft a richly textured and delicate soundscape evoking images of desert heat and dark night skies that span as far as the eye can see.

Phil Derby @ Electroambient Space wrote: "When I heard that Steve Roach and Loren Nerell were going to be releasing their first true collaboration, I was excited at the prospect, but I also had a preconception of how it would sound. Given Nerell's penchant for gamelan music, I was expecting Indonesian influences, something tribal perhaps. Instead, TERRAFORM is a wondrous work of subtlety, as soft and as smooth as the beautiful sandstone pictured on the DVD-sized cover and the three large postcards within. It is difficult if not impossible to tell who contributed what to the gorgeous textures and atmospheres. Starting with 'Cavity of Liquids,' immediately we are treated to a feast for the ears as soothing walls of sound wash over the listener. This abstract sound painting includes hints of crickets, sounds vaguely suggestive of water, and deep otherworldly echoes. There is no melody, no rhythm. The feeling is cool, relaxed. There is darkness, but there is warmth as well. Can it be both cool and warm? Yes, it can. 'Ecopoiesis' moves into a deeper fuller drone, but with interesting background noises skittering lightly about. Like Steve's POSSIBLE PLANET, this track creates a unique, alien world. 'Texture Wall' is brighter, with smooth metallic resonance. The night sounds move forward in the mix, and we spend the next 28 minutes immersed in the artificially formed yet highly organic environment. 'Paraterra' wraps things up with more of the same, yet different. One of the best ambient albums of 2006."

Vivid ecosystems of sound abound on this field recording of the mind. Drones, liquid resonances and soothing walls of sound wash over the listener. This abstract sound painting includes hints of crickets, sounds vaguely suggestive of water, and deep otherworldly echoes. There is no melody, no rhythm; the feeling is cool, relaxed, and yet in the darkness there is warmth as well. The worlds Nerell and Roach have built do not exist on any map; their impact goes well beyond what can merely be perceived with one’s ears.

Tokafi.com: “For TERRAFORM, they have opted for building a galaxy from scratch. The result is a place of incredible lushness, borderless vastitude, sudden atmospheric swings, wordless spirituality and many different colors turning in slow motion like shimmering grains of sand inside an infinite kaleidoscope. For most of their duration, these pieces do not want to “go” anywhere, they just “are”, existing and breathing in all of the detailed richness of a physical landscape, allowing the gaze of the listener to stray and inspect its structures from the purple-tinged horizon to the dense brushwoods of its rainforest and the lifelines of its lush and moist green leaves. There is a sound of crickets running through almost all tracks like a beacon, assuring the wanderer of the safety of his trajectory by its presence and warning him inside the cavernous wastelands of its absence. Of course, all of these animal allusions, all of the noises, all of the swelling and congesting pads and liquid resonances are all highly artificial – once you start observing their characteristics in an intellectual fashion, there is not the slightest doubt that this is not a field recording, but in fact a collage of synthesized harmonies and effects.”

Loren Nerell and Steve Roach met in Los Angeles in 1981 in the early days of the electronic music scene. It was a time when like-minded musicians who understood the importance of emerging technology were coming together in local clubs and performance venues to share what they knew and learn from one another. After years of friendship and occasional musical collaboration, in 2006 the two decided to convene in a relaxed setting to see what they could distill from a blending of their collective talents and individual styles.

The two composers are both experienced in using the world around them as inspiration for their art; Nerell taped his Indonesian Soundscapes in 1999 and Roach, of course, has travelled the deserted rockscapes of Australia to come up with Dreamtime Return, an album now considered a milestone and a classic. In both cases, though, what you heard wasn’t a 1:1 conversion of their journeys, but the aural representation of a multisensory experience.

TERRAFORM emerged from their mutual desire to create an organic, surreal and deeply ambient environment of langorous humid soundscapes. Through a labyrinth of studio techniques, a kind of audio TERRAFORMing was developed. Heavily textured and mood altering, the long uninterrupted flow seemingly slows time down by way of the surreal dark ambient soundforms found in much of Roach’s work. Nerell brings the steamy, evanescent blend of his mutated Indonesian sources, a signature sound that defines his previous releases for Amplexus, Side Effects and Soleilmoon.

Loren Nerell has studied gamelan music for the last twenty-five years, expanding and fine-tuning his mastery of Indonesia’s unique indigenous musical traditions through performances and field work. During this time he has accumulated a large number of field recordings, many of which he uses in his compositions. This has evolved from simply using the material as-is to an elaborate processing technique in which the material is taken to a point so far from its original source as to be unrecognizable.