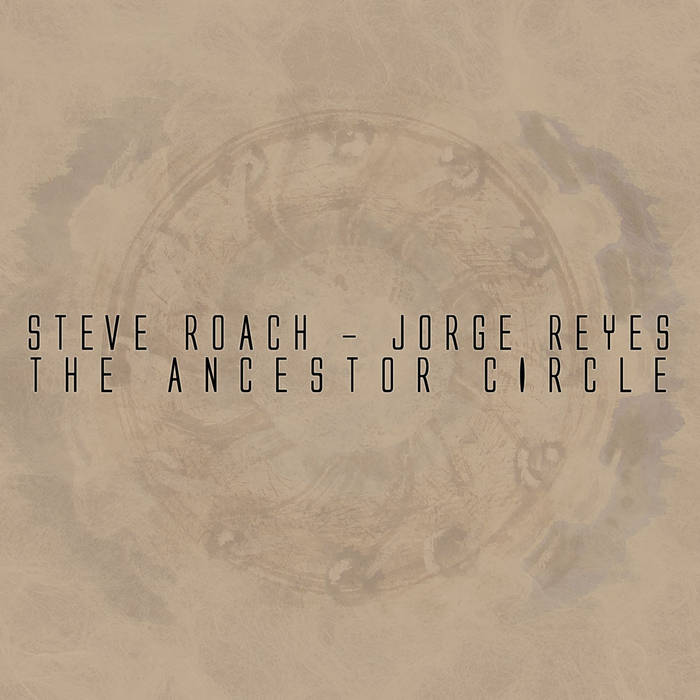 Dave Aftandilian Amazing to hear Jorge and Steve together once more! Did not think I would have that privilege again in this life. Lovely warm, cyclic, organic tribal ambience. Feels very tied to the Southwest to me--I can almost see the shadows dancing across the canyon walls, and feel the rhythmic flutes and dancers' feet echoing from the kiva walls.

Edward J Roller This one has eluded me. Vine, Bark and Spore era recordings that with all the latest recordings from Steve and others was put on the way back burner. Now with pay what you can for this one, no excuses. I can travel back in time and catch more of the tribal vibe Steve created with Jorge, Suspended Memories, and Journey of One. Thanks again Steve for helping me fill a catalog hole.

rikm Roach and Reyes have crafted a magnificent example of rhythmic ambience on "The Ancestor Circle", an organic and living collection of tracks that speak to ritual and process and ceremony.

Sandra Barnes wow I kinda drifted off, love it.

neur0dancer pure tribal ambient. Sometimes a bit overwhelming, or the other way. I do miss Jorge Reyes, tho. Such an awesome performer on stage. These recordings are from 2000, according to the label. Favorite track: Temple of Dust.


Conjuring images of a primal futurism, this alchemical blending-of-sound is a ceremonial offering to the forgotten gods. The Ancestor Circle is a new tribal-ambient-electronic collaboration, the first recording from Roach & Reyes since Vine ~ Bark & Spore (Timeroom 2000). This is the lost chapter of a long soulful journey that has taken twists and turns in its unfoldment. The music feels steeped in a frothy mind-altering blend, waiting for years as the potency increased. Roach & Reyes combined their instinctual nature — developed over almost a decade of worldwide live and studio adventures — leading up to the core of what became The Ancestor Circle. It is in this circle that their sound is unearthed from deep within their primordial soundworld, where prehistory meets future-tech creating a sound impossible to carbon date.

Like the audio artifacts of a lost tribe, the studio source recordings that form this album’s foundation were uncovered in 2013 on a cryptically-marked set of tapes. Created the week before Roach & Reyes’ May 2000 concert at Tucson’s Temple of Music and Art, this is their last joint studio project as Reyes passed on to The Ancestor Circle in 2009.

Roach comments, “Jorge is still very much alive here in the circle where we always met with an unspoken language of sound constantly moving through us. As I completed this music now, adding new elements and evolving the arrangement, I could feel Jorge’s spirit listening and interacting with me in the studio, offering feedback or sometimes making his guttural sounds of agreement like he would do in the past when we were deep in the process of carving on a mix. Just as in previous magical studio and stage experiences, we are in the circle once again.”

For thousands of years, music was created to assist entrance to expanded states of consciousness, support a passage of life, birth and death and invoke the gods, spirits, and allies. While the abundance of today’s entertainment-music has lost this powerful inner core, on The Ancestor Circle it is fully reinstated. This is a new “medicine music” as it should be: a probing visceral experience with the power to illuminate and shroud in mystery, digging deep into zones hidden within the psyche. It offers a potent realm of renewal for those seeking an unfiltered, cathartic rinse-down of today’s technological, modern world; it helps hit the reset button of perception.

Rising up from a dark shroud of night to embrace life, an ancient voice chants in serpentine ecstasy only to subside and hover next to a slow realm of eternal time drawn from electronics, percussion, prehispanic flutes, ocarinas, other acoustic instruments and silence. When the sound dissolves beyond recognition, a subconscious landscape arises, whispering of faded visions painted on stone, echoing on studio walls, of times gone by and times to come. Roach & Reyes are still here bringing us messages from the infinite.

Jorge Reyes took an ethno-musicological approach to music-making on 20 solo albums; released throughout the late 80s, 90s, and 00s these albums all has a special emphasis on indigenous and shamanic traditions from Reyes’ native Mexico. After years of tirelessly performing across Europe, he met Roach in the early 90s at a festival on the Canary Island of Lanzarote. Along with the Vine ~ Bark & Spore collaboration with Roach, Reyes & Roach teamed with Spanish electric guitarist Suso Saiz for two mid-90s albums from their group project, Suspended Memories (Music From The Hearts of Space 1993 & 1994). Reyes passed away on February 7, 2009.

Steve Roach is a pioneering cornerstone of ambient-atmospheric-electronic music with over 100 albums to his name. Since the early 80s, Roach has approached music like a medicine man approaching the void: engaging the challenge, uncovering new mysteries, and bringing them back to share with the world. From the expansive, time-suspending spaces reflecting his spiritual home in Arizona to the fire breathing, ethno-ambient expressions woven from all things electric and organic, Roach’s long list of groundbreaking recordings are fueled by his prolific nature and uncompromising approach.
Release Date: November 4 2014