The Coyote in the Graveyard 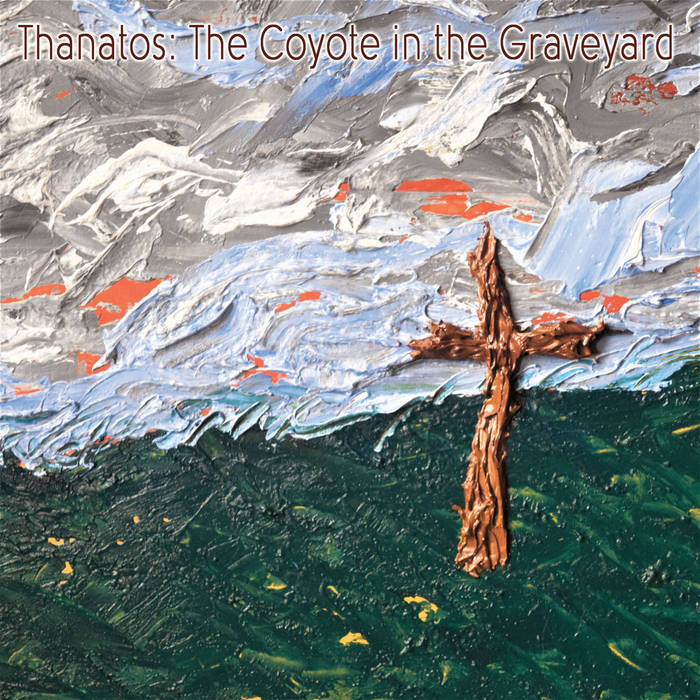 A stark, foreboding record with an eye to the apocalypse

The Coyote in the Graveyard is the sixth release from Thanatos led by band co-founder Patrick Ogle. Based around Ogle’s baritone vocals and his electric guitar, the album continues his mixture of emotional and raw post-punk and darkwave with nods towards electronica and Americana. “My records often turn out different than how I envision them,” says Ogle. ”This one was supposed to be positive! I wrote the title track in a truly optimistic mood. Then? The election of 2016 and my optimism vanished like the proverbial fart in the wind. It became a pretty dark record.”

“The songs on this record were recorded over a period of three years,” says Ogle. “Inspiration for some tracks began with riffs used in the blues; I always feel that two chords played with feeling beat a dozen chords played with sterility. While working on these tracks I saw a David Lynch retrospective. During a particular scene in ‘Lost Highway’ I thought, ‘don’t look in every dark corner’ as a warning to the characters. Then I wrote a song about it, ‘Every Dark Corner.’ It is as simple as that. I’m not sure it means anything really. In fact I am pretty sure it doesn’t – surrealism!”

“The title, ‘The Coyote in the Graveyard,’ came to me as I rode the El between Chicago and Evanston. There is a cemetery between the two cities, and it is full of coyotes that hunt rabbits and skunks that abound in the area. It stuck in my head and I wondered about the symbolism of the coyote. It is an American creature. I read a story about how the coyote created the night sky. To me? A story is as real as science, as real as something you watch happen. A story is powerful, as powerful as reality. To me? It is reality.”

“When recording began in 2015,” Ogle continues, “the idea was to include musicians who were friends with or who had worked with Thanatos in the past. Logistics put an end to that.” The record features Ogle (guitars, octave mandolin, vocals), Tim Larson (guitars, bass, synths, ribbon controller, octave mandolin), and Boyd Ogle II, Patrick’s son (synths, ribbon controller). No other musicians make an appearance.

The Coyote in the Graveyard, engineered and produced by Larson, features ample use of Larson’s musical philosophy: don’t sacrifice a performance for a minor glitch. Hopefully the minor glitches were kept to a minimum, but the pay-off is in how each recording (even the covers and traditional songs) are emotional and raw. They vocals were mostly recorded in one take.

Thanatos began in the 80s when Projekt founder Sam Rosenthal and Ogle (then going by Padraic Ogl) were in high school. The band’s first release was on cassette, way before cassettes were cool (they were, in fact, really not cool). The CD didn’t even exist yet and vinyl cost a lot of money for teenagers. The project sat on ice until 1993 when the first CD, This Endless Night Inside, was released.