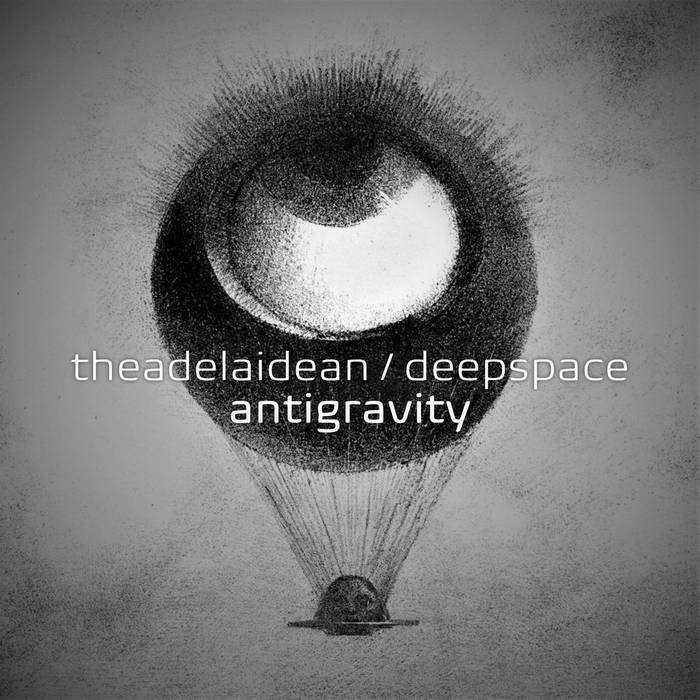 Dave Aftandilian The cover image sums up this (dark) ambient album nicely: sometimes gently buoyant, sometimes shadowed and creepy. Listening to it feels like drifting through the darkening heavens at twilight, shivering as you pass through seeping clouds, wondering in awe as you walk through the doorway behind the moon, then disappearing behind the velvet curtain of twinkling stars.

theAdelaidean and deepspace’s second collaboration of 2021 trades stately, psychic impressions for weightless, crystalline synths that sparkle and hum with otherworldly energies. Driven by slow enigmatic melodies, ANTIGRAVITY leads the listener on a weightless odyssey built from alien sounds and poignant, all-too-human cadences through an electric void of otherworldly (un)consciousness.

A delicate fantasy meticulously assembled from inspirations as diverse as art music and contemporary electronic works, ANTIGRAVITY takes an eclectic approach to unfolding moments that teases the listener with bioluminescent shards of synthetic ambience, glittering like anxious alien moths, while leviathans of sound emerge from and retreat into distant regions of space. Ever-changing currents of sound bear the listener outward as well as inward, triggering images of vistas unseen by human eye. Dark blue lights flash softly while soft star trails criss-cross over reef-like nebulae, full of wondrous light. In a vast diorama of sublimity where near and far do not figure, stratospheric heights fall away to distant glowing planets below, all gentle and inviting.

Enter a darkly phosphorous world and drift away, on your couch or in your spacecraft...


Bandcamp supporter Dave Aftandilian writes: "The cover image sums up this (dark) ambient album nicely: sometimes gently buoyant, sometimes shadowed and creepy. Listening to it feels like drifting through the darkening heavens at twilight, shivering as you pass through seeping clouds, wondering in awe as you walk through the doorway behind the moon, then disappearing behind the velvet curtain of twinkling stars."

Although a relative newcomer to the ambient music scene, theAdelaidean has been creating music since the 1980s. He has 6 albums released to date and has composed for the stage. He cites influences such as composers Cage, Webern and Poulenc, serial music, and contemporary electronic ambient music artists. In his other life, he is #1 bestselling author Sean Williams and teaches creative writing at Flinders University in Adelaide, South Australia.

deepspace is award-winning ambient musician Mirko Ruckels from Brisbane, Australia, with a discography of 12 releases. Creating with various synthesizers and acoustic instruments such as bells, guitars and piano, his themes range from macro – space, underwater, deserts and science fiction imaginings, to micro – internal states and microscopic life. deepspace is influenced by modern ambient artists as well as art music, particularly the work of the French impressionists Claude Debussy, Maurice Ravel and English counterpart Ralph Vaughan Williams.

Kyle McNeill joins the show to talk about his new project, Phantom Spell