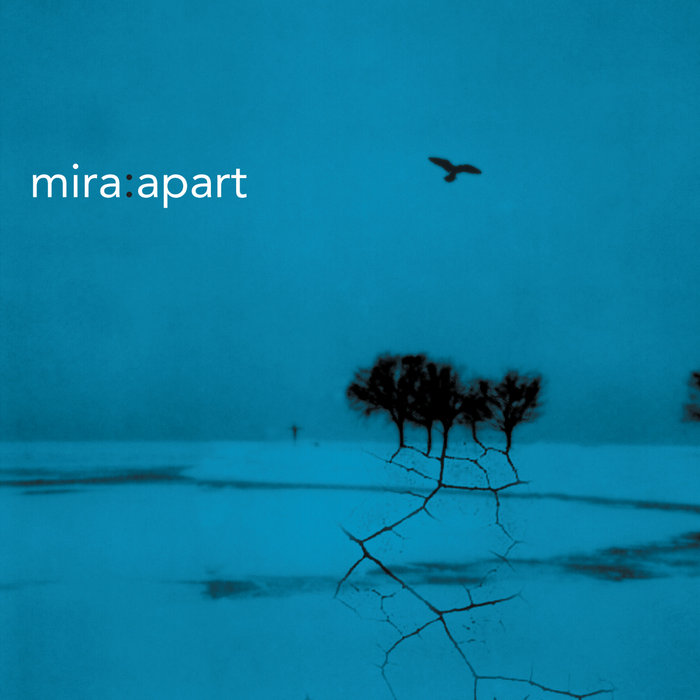 rikm I was a big fan of Mira when they first appeared in the early 2000s, and I really admired their distinct and timeless sound, something that felt so present and relevant but wasn't held down by any sort of temporal connection.

Flash forward twenty years, and their music is still just as timeless and beautiful as it's always been.

“words just don’t capture the raw emotional power of the album to suck you in and spit you out, staggering in wonder.” – ink19

apart tears at the edges, pulling mira’s sound apart to recompose it into something new, delicate, touching, aggressive and surprisingly accessible. apart combines dreamy shoegazer pop with edgier angular guitars and rhythms; all in support of regina sosinski’s ethereal soprano, which speaks with a yearning and intimacy so beautiful, it is subtly unnerving. drifting from the slightest whisper to an aching scream, her voice is nothing less than captivating.

apart tells the story of heartache, loss and the unending desire to mend one’s heart, to find a sense of connection. regina writes “the title is so fitting in so many ways . . . for me, personally . . . and for the band as a whole. it’s the constant struggle of wanting / needing to be a part of something, but feeling apart from it all as well. i think i forgot how to feel for awhile . . . and that sense of emptiness made me numb. opening back up has been a slow process . . . ”

apart hits hard and proves that the brilliance of their debut was no lark. mira’s self-titled debut was projekt’s best selling darkwave release of 2000, thanks to in-store listening stations, college radio support and fan buzz generated by their mp3.com and napster success. fans are already excited about apart; since early april, mira has had two tracks from apart at the top of the mp3.com shoegazer charts.

apart crashes out of the gate with “space,” a danceable track with dense tribal rhythms and a pounding bass line. mira balances the harder edges with tracks like “plastique,” a sparse duet between classical guitar and vocals that breaks apart to reform itself as a beautiful melancholy waltz, in which regina’s gossamer voice dances alongside a mournful violin.

apart ’s swirling torrents of heavily drenched guitars at times blister and rage, and just as suddenly transform into clean contrapuntal lines. a sense of continuity between the voice and music reveals a great depth, taking the listener through every shade of emotion and leaving them with a spinning head and aching heart.

“it’s like you and these tracks have x-ray vision; because they are so perfectly attuned to the way you feel, the subtle minefields of emotion that exist upon the present soundscape belies the extraordinariness of tallahassee’s mira. the comparisons to the cranberries are rather unmistakable at first listen and influences that range from slowdive and the cocteau twins to early cardigans span the entire album. you struggle between the bonds of the songs (and your own emotions) around your wrists and the vocal angelics that call you up into the distance.” – spin.com


"Overcast and melancholy, just the way we like it.
It would be easy to describe Mira as what you'd get if you spliced together elements from Cocteau Twins, the Sundays, and Starflyer 59. Mira bring their own brand of shoegazing goth to the equation, in many ways picking up where those bands left off. Adding to the lexicon of doomed lover, Regina Sosinski's vocals light the way through the murk of melancholia, nearly rivaling Liz Frazier and Harriet Wheeler both artistically and emotionally. The heady mix of ethereal vocals and rich guitars with unusual rhythms and off-meter inflections makes Apart a distinctive album in its own right." — Mark Burbey, Alternative Press, September 2001