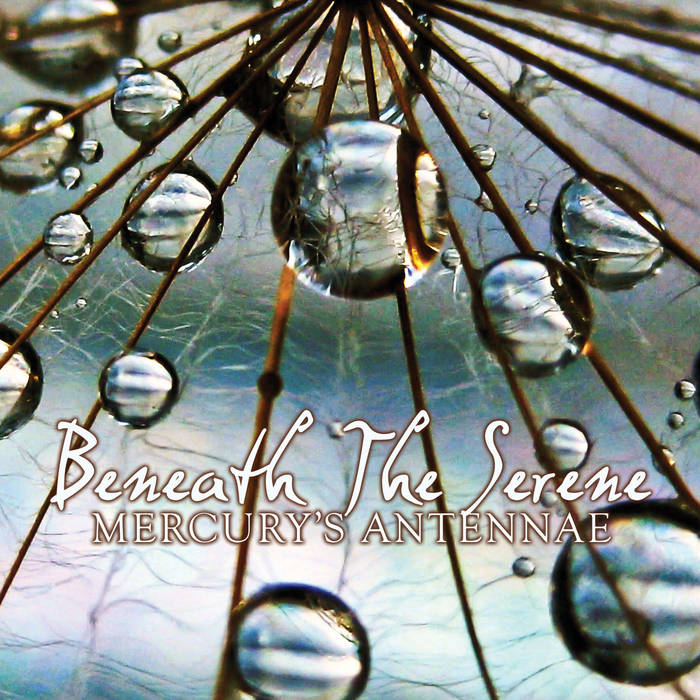 rikm On "Beneath the Serene", Mercury's Antennae continue to offer sublimely beautiful Darkwave that both inspires and delights.

Blissful and wonderful, "Beneath the Serene" is an exceptionally strong release from a truly amazing collection of artists...

What is the serene? What lies behind the beauty and softness? Is it a real truth? Can it be so pleasing that it’s frightening, addicting, toxic, almost deadly?

Fragile, driving and soaring in turns, the seven beautifully intimate ethereal, darkwave, shoegaze tracks on Beneath the Serene venture through the illusion of serenity to a raging ocean of uncertainty that can be overwhelming, yet can also expand the spirit and sense of self.
Bringing over 25 years of experience to their second full-length release, the heavenly voice of Dru Allen (This Ascension, Mirabilis) and treated multi-layered guitars and electro-ambient atmospheres of Erick R. Scheid (Translucia) are joined by the bass talents of Cindy Coulter (This Ascension, Faith and the Muse.)

After two Projekt releases as a duo (A Waking Ghost Inside and The Guides EP,) Allen and Scheid yearned to stir up the band’s instrumentation. When Coulter joined the band on bass at a 2014 Portland show, it left a spiritual and musical impression on the two, inspiring them to ask Coulter to join for an entire tour the following year. The bass guitar brings an earthy, grounding element to the band as well as a lusher, fuller sound reminiscent of early Cocteau Twins, The Cure and Lycia’s Burning Circle album.

From the haunting opener “Le Spectre Concubine” to the joyous abandon of “Into Lost and Away,” Beneath the Serene takes flight into the ether while traversing paths inward, painting aural landscapes that meld voice, organic instrumentation and electronics. Dru’s seductive dream-felt vocals and introspective lyrics echo deep in the tracks. Scheid’s instrumental compositions take the band to new realms such as on the translucent “Migration” which draws influence from ambient luminaries such as Robert Rich (who mastered the album.)

Over the second half of 2015, each member recorded their parts separately in San Francisco, Portland OR and Geneva. Working from different parts of the globe posed a natural challenge to staying connected throughout the writing of the album.

“The songs became a catalyst for self-introspection,” says Allen. “I’d be unsure about something musically, and that feeling would just keep expanding. My whole spirit was questioning and getting questioned. At times it got a bit overwhelming. All three of us experienced our very own deeply personal process of self-examination which played a huge role in the writing and recording of these songs.”

Themes such as questioning love and existence, yearning for connection while feeling isolated, and searching for truth, colored the songs with emotion and vulnerability. These motifs find a convergence in the title track “Beneath the Serene;” it speaks to transcending oneself by accepting that life’s questions often have hard (or no) answers:
“Our hearts, our fears wrest away/taking breath, and scan the skies…”
Featuring contributions from guest vocalists Ingrid Blue (Trance to the Sun) and Summer Bowman (Mirabilis, the Machine in the Garden), and guest guitarist Neil McKay (Autumn), Beneath the Serene offers a variety of swelling moods from the dark and hypnotic to the sublimely tranquil and romantic.

Mercury’s Antennae imbue ethereal wave, shoegaze, and ambient electronic music with an illusive allure of something greatly desired that – while pleasurable when experienced – leaves us forever transformed.