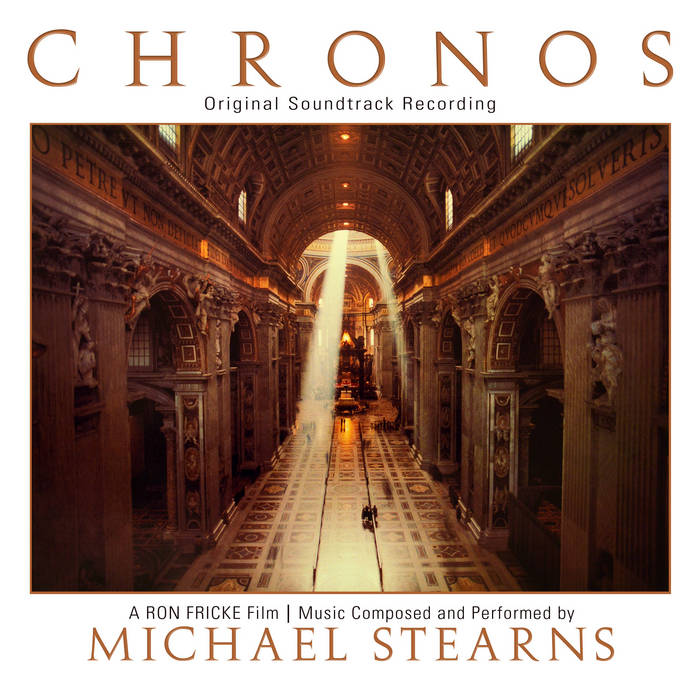 In Greek mythology “Chronos” is the personification of time. On composer and electronic musical visionary Michael Stearns’ 1985 album, CHRONOS serves as the tempo of a cascade of celestial movements, terrestrial sonic luminance, and morphic electronic harmonies.

Composed as the soundtrack for the IMAX film by cinematographer Ron Fricke (previously of Koyaanisqatsi), these 8 tracks combine to form a continuous 43-minute pandimensional experience, a sensual sound voyage with stops throughout the ancient and modern worlds.

Scored as the film was shot, Stearns’ CHRONOS leads us through earthbound and aerial spaces, the long plains, the cosmos, the big cities and the tracing of the spiritual and corporeal lights which inform each movement. The symphonic and majestic main theme in “Corridors of Time” hints at vast spaces and soulful longing flowing with cosmic poetry. The track reaches a powerful crescendo resolving in ghostly atmospheres, driving escalator steps and whispered voices. It returns half an hour later weaving into the themes of the swelling incandescent tapestry of the final two movements.

Working seamlessly with director-cinematographer Ron Fricke, composer Michael Stearns embraced the roles of soundtrack producer, music supervisor, sound editor, and sound effects producer — effectively creating the sonic and emotional context for every scene in CHRONOS. This rare unity of music, sound, and image elevated the film from an unusual documentary to a classic work of art.

In the tumultuous years since the 1985 release of CHRONOS, it’s been easy to forget how innovative this film was. Its subject matter, motion-controlled time-lapse visuals, and powerful wordless soundtrack all broke new ground — redefining what was possible in the immersive / giant screen / surround sound format.
════════════ ╰☆╮════════════
Synth & Sequences:

Reflections from Michael Stearns on the creation of CHRONOS

CHRONOS was one of the most inspired musical pieces I’ve had the fun of creating. Having an hour-long reel of tape to record one ‘longform’ piece of music, start to finish… in surround!… For amazing time-lapse large format film / images… And being paid to do it! Couldn’t be better!

CHRONOS gave me the canvas to paint musically with an amazing array of instruments. From Constance Demby’s “Space Bass” on the opening track, the Serge Synthesizer, the Beam, acoustic instruments… an incredible musical palette.

In early 1983 I finished two years of working with composer Maurice Jarre on four pictures back to back. That fall, CHRONOS associate producer Steven Marble approached me about scoring a large format film, something I had always wanted to do. He introduced me to director / cinematographer Ron Fricke and producer Mark Magidson. Ron had been listening to two of my earlier albums, ANCIENT LEAVES and PLANETARY UNFOLDING. He invited me to score CHRONOS.

Before shooting began, Ron and I had several conversations about the structure of the film, the different movements and how the film would unfold.

In the spring of 1984 Ron and his crew went out to shoot at their first location, the Egyptian pyramids. I traveled with them to get a sense of the flow of time Ron was capturing with his time-lapse 70mm camera. From the pyramids, to the traffic in Cairo, to the call to prayer from the mosques, to the herds of camels on city streets… it was a wonderful introduction to the movement through time and space the film would capture.

When I returned from the shoot in Egypt, I began writing and recording the music in the new studio. I worked over a three-month period to finish the 43-minute composition.

When Ron returned, he and Alton Walpole began the editorial process, editing to the music that was already completed. The images and music worked beautifully together.

CHRONOS opened in 1985 at the Rueben Fleet Space Theater in San Diego, and La Geode in Paris.

Before the opening, I mixed a stereo recording of the soundtrack using Ambisonic surround encoding onto a Mitsubishi X-86 digital recorder. The “Original X-86 Ambisonics Mix” was the source for the 1985 CD and LP release and was remastered for Projekt's CD & digital release.

A second “fold-down mix” was created in 2012 from the 35mm 6 track [should be 6-track?] surround film master. As such, it is not a discreet [discrete?] stereo mix but a rebalancing of the 6 channel print master folded-down into stereo.

In the spring of 2022, Bob Ohlsson remastered both versions of Chronos. The fidelity and dynamic range revealed during this process is fantastic! With digital technology not available back in the day (level, EQ adjustments and further processing), Chronos takes on a vibrant new life; I’m so impressed with the sound of these releases on Projekt. They bring excitement and magic back into the unfolding of this seminal piece of my work.

Projekt makes available two mixes of CHRONOS. This page is the remaster of the mix used for the CD and LP at the time of the film's release, and Michael’s favorite of Projekt's two re-releases.