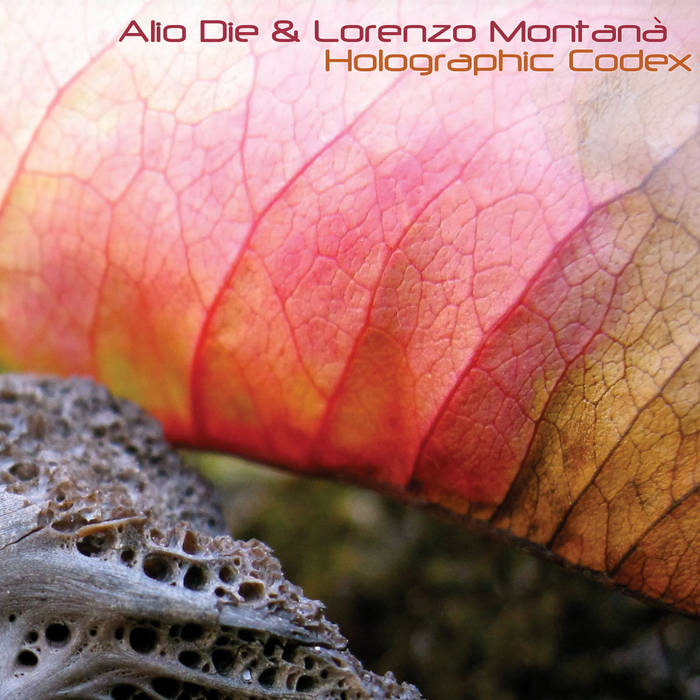 ei-Light at times I can listen to nothing but THIS

Sandra Barnes wow I was blown away listen to this album. I mean that in a positive way. Favorite track: Akvil.

Biff Johnson and Shelley Andrews Lush, wonderful and not as beat oriented as you might have heard. Great sound and production.Alio is a treasure and this release proves why. Favorite track: Muns de Etrah.

Crossing styles and boundaries, Holographic Codex is a mixture of atmospheric ambience, IDM sequences and psybient textures; these cult Italian musicians create a blending of ritualistic soundscapes and technogenic landscapes. Alio Die has over 60 releases, some on America’s Projekt Records and others on his own Hic Sunt Leones label. Montana recorded 5 collaborations with Pete Namlook on Pete’s German FAX label, plus released 10 solo albums with various European imprints.

On their first collaboration, Alio Die & Lorenzo Montanà create transporting and alluring aural sceneries of evolving, intimate sounds. Featuring intriguing beats seldom heard on Alio Die albums and a greater use of textural, granular synths than past releases from Montanà, Holographic Codex is awash in mystical drones and cosmic impulses surrounded by subtle hints towards the atmosphere of the Renaissance.

Standout tracks include the early 70s Tangerine Dream-flavoring of “Silent Rumon” and the psybient escapism of the opener, “Muns de Etrah.”

Lorenzo Montanà is an Italian soundtrack composer and producer. He started in the nineties producing & arranging more then 40 albums with several artists across the electronic, ambient, IDM, jazz, classical and rock genres. With his solo album Black Ivy, he signed to Pete Namlook’s FAX label. Together they collaborated on the popular Labyrinth (I-V) series. His meticulous production style finds a complex balance between melody and intricate beats. In fact, his work with the singer Tying Tiffany as T.T.L. (Through The Lens) has landed their song “Deep Shadow” for The Hunger Games movie trailer. There is a cinematic aspect to his works, where the cinema, of course, is often in your mind.

Alio Die is the name of Stefano Musso’s shimmering, expansive dronescaping solo-project. Musso began work under the name in 1989, and has released over 60 albums including fruitful collaboration with artists such as Robert Rich, Vidna Obmana, and Amelia Cuni. His personal musical signature is a hybrid between sonorous soundscapes and acoustic mysticism: a shadowy, cavernous, intensely detailed fusion of acoustical elements, sample treatments, sparse, echoing percussion, and deep, atmospheric sound design.