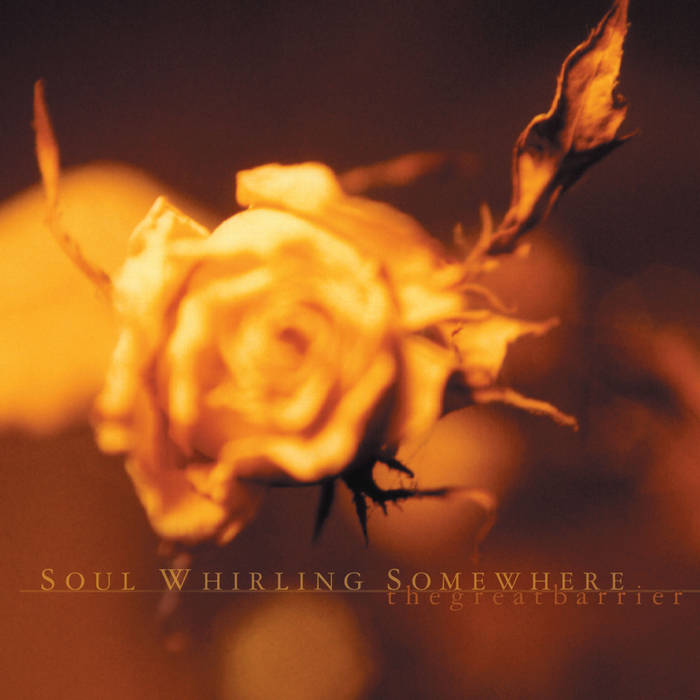 Scott Lots of great songs on this collection. I've had it on CD since it came out but got it here for the two previously unreleased tracks. Favorite track: i should throw myself under a train.

A best of retrospective. Originally released in 2004 on CD on Germany’s Kalinkaland Records.

A review from All Music Guide.com | AMG REVIEW: Less a greatest-hits than a brisk career summation to the point of its release, THE GREAT BARRIER is an enjoyable enough single-disc compilation from all of Soul Whirling Somewhere aka Michael Plaster’s releases. Cherry-picking from the earlier albums and EPs and arranging the results in non-chronological order (two-thirds vocals then one-third instrumentals), THE GREAT BARRIER focuses mostly on the HOPE WAS and PLEASE SENND HELP albums. As a result it captures Plaster in his slightly more stripped-down and focused mood, while the textured synth arrangements that first brought him to attention are spare in comparison — only one song from his majestic debut EATING THE SEA, “Not Breathing,” appears. But this is a fairly limited complaint given the excellence of the material, and the song choices are apt, covering both Plaster’s emphasis on exquisite melancholia (“The Last Time I Left,” “Nani”) and intentionally over-the-top humor in the service of same. Then again, titles like “I Should Throw Myself Under a Train” and “Every Female Werewolf Ever, Listed Alphabetically by Name” really couldn’t be taken any other way. Either way it’s a fine overview of Plaster’s particular gift for softly sung emotional turmoil matched with a variety of low-key but attractive arrangements all performed by Plaster himself, outside of one drum performance on “The Great Barrier” itself, the closest the band has ever gotten to rocking out (albeit politely still). For the completist who already has everything, two other unavailable songs make a bow. “So Much,” apparently recorded for the compilation, is enjoyable, Plaster in pseudo-rock-band arrangement mode and firing up the volume accordingly on the second half — it could be a sign of the future, balancing it as always with his calm singing. “Stuck,” an unlisted song from 1998, concludes the collection with acoustic guitar and slightly ragged singing, a charmingly rough demo of sorts. — Ned Raggett
Soul Whirling Somewhere is one man: singer and songwriter Michael Plaster. He is the creative mind of Soul Whirling Somewhere, a band that has broken through barriers, infused with the heartbreak of David Sylvian and the musical sensitivity of Tears for Fears. Plaster leads his music to a full acoustic plateau with soft caramel-sound of dense woven Synthesizers. He writes intelligent songs, which take an emotional chance: pessimistic, with the feeling of being trapped, but also with the need for love, a future, and a need to believe in something more – and that’s how his music comes across: powerful and self-indulgent. It will touch your ears and your heart in a way you wouldn’t expect.  “Soul Whirling Somewhere represent my emotional reaction to something that happens in my life,” explains Plaster, “and once they start rolling around in my head, it’s like I need to get them out in order to get past that point in dealing with my emotional distress which the songs represent. If I don’t, they would probably just haunt me, poison me and float around in my head for a long time.”  Plaster released his first album, EATING THE SEA, in 1993 on the famous US-based label Projekt Records. “The first album was very sparse, minimal synthetics,” explains Plaster, “because I only had a 4-track.” Nevertheless, it was an amazing debut album, magical and unique.  Two years later came the second, much darker studio album, EVERYONE WILL EVENTUALLY LEAVE YOU. Next came the CD-EP PYEWACKIT which featured a new fuller, more guitar-based sound. The CD was a precursor to the epic double CD Masterpiece HOPE WAS, released in the summer of 1998. “I live in the desert, in the West, so growing up here has probably added its flavour to what I do. I love that acoustic, ‘western, north Dakota’ style because it is very raw; very stark and plain and vast and free.” Hope Was documented the slow and painful falling-apart of a relationship, on songs featuring an even more raw and acoustic sound. Without any doubt his most important album until now.  Over the next two years, the band took a break from composing any album as Plaster’s life was in a rather confused state, not knowing what he was doing or where he was going. After this long period of aimlessness, he began work on the next album called PLEASE SENND HELP which was coincidentally released on Michael Plasters birthday in September, 2001. Three weeks later, after the attacks on the World Trade Center in NYC the band came up with the idea to put on a benefit concert to help raise money for the Red Cross. And so Soul Whirling Somewhere appeared for the first time in a non-acoustic, full-band format.  THE GREAT BARRIER is a collection of songs spanning the last ten years and includes two brand new and previously unreleased song.

1995 Everyone will eventually leave you
projektrecords.bandcamp.com/album/everyone-will-eventually-leave-you

2004 The Great Barrier (NAME YOUR PRICE best of)
projektrecords.bandcamp.com/album/the-great-barrier-name-your-price