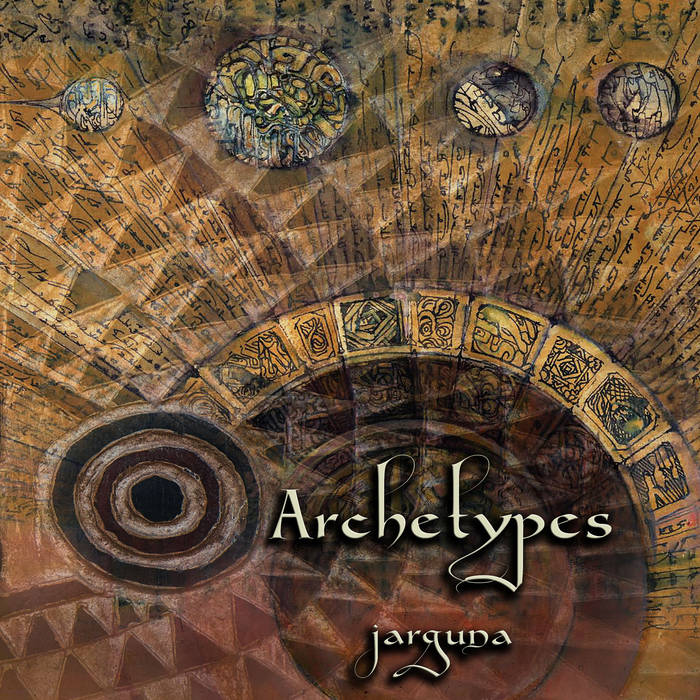 Jarguna is Italian ethno-organic-ambient sound-artist Marco Billi, and on ARCHETYPES he revisits material begun — but left unfinished — in 1997. The pieces that comprise his 26th album weave a tribal percussive perspective into his sound, drifting like a dream into his well-loved drone-electronic soundscapes. The archetype becomes a symbol, the symbol becomes a ritual, the ritual becomes sound. A pulsating, primitive journey is the battle of a man in front of masked beings, in truth, only the mirror.

After my first album has passed another 25 and despite this being the 26th, it is a project that dates back to 1997, so the first of all, afterall, even before my debut, Introspective Course. The album describes an interior path that tries to tell the boundaries between us and the archetypes. The archetype becomes a symbol, the symbol becomes a ritual, the ritual becomes sound. The traces follow each other with some archetypes, beginning with Animus Anima, that is the female side that is in the man and the male side that is in the woman. There is also the Uroboro famous symbol of the snake (or dragon) that bites its tail, the meaning of cyclicity, death and rebirth; things transmute but do not cease to exist. Percussions are a fundamental basis of this album, in the ritual of the drum I want to disrupt the mental frame of preconceptions, conditioning and exposing the ego, a battle between fear and ecstasy. In this, I was inspired by a Japanese artist, Tomo Kuwabara of the band Vasilisk, that was my reference throughout the 90s to electronic ritual music. The percussive sequence evolves from uncertainty, sobbing, as if it does not know a precise direction, hindered by ethereal suspensions, until it falls into obsessive, overbearing, repeating plots, cadenced by an adrenaline atmosphere. A pulsating, primitive journey is the battle of a man in front of masked beings, in truth, only the mirror. Another inspiring muse is the lands and the peoples of where I work, especially in West Africa, like Burkina Faso, where the percussion and the song narrations are still a cornerstone of artistic communication.

I started my soundpath in the early nineties with simple synthesizers, in search of drones to assist meditation. Only after a trip to the Amazon in 2000 did I began to appreciate ritual music, ceremonial, always heard but never deepened. With my first album (released in 2006), I began a personal journey, a magical-spiritual exploration. I do not follow any religion, dogmas, or philosophies (I feel very close Taoism) but I am intrinsically fascinated, especially I wonder what man is looking for in all of this. Over time I put aside rhythms, and as album followed album, it is only in 2018 that I picked up a very old work, started in 1997, let’s say the first time I worked on music. Even if from that date now only the title remains, Archetypes.

An album that has a theme and a precise path, to understand what archetypes are, deeply linked to symbols, rituals and conditionings. The archetypes are transmuted into symbols, the symbols lead to the ritual and the ritual becomes sound, with this thought I have posited the idea that through the sound you can also reach an archetype, recognize it and become aware of it. You can get rid of your mental grid only if you know how to deal with what you have inside, especially fear.

The album begins with the double face of the first archetype, “Animus Anima,” that is, the feminine inside the man and the masculine inside the woman (a vision also of Taoism), well described by the psychoanalyst C.G. Jung.

The second track, “Thousand Facets of a Memory,” represents the distorted vision that is generated through all the imposed conditioning and only in some moments, your true self, discovered between the experiences of life. experiences often made of pains that fortify and awaken your conscience.

In “Dream Frog,” the third track, consciousness falls into sleep and you do not understand where reality or illusion is anymore. I quote a short poem that perfectly describes what I want to explain, ‘Once upon a time, I, Chuang Chou, dreamt I was a butterfly, fluttering hither and thither, to all intents and purposes a butterfly. I was conscious only of my happiness as a butterfly, unaware that I was Chou. Soon I awaked, and there I was, veritably myself again. Now I do not know whether I was then a man dreaming I was a butterfly, or whether I am now a butterfly, dreaming I am a man.’ The truth can be hidden in many points of view.

“Ritual Ground” and “Ouroboros” are closely linked tracks, the rhythm is the matrix of the hypnosis that, unlike the first two tracks, the percussion is constant and cadenced, allowing to be transported on a train track without too many jolts.

“Atavic Fears” is the apotheosis of percussive arrogance. In it, I want to express the fears we have inside with a hysterical ritual to evoke them and to exorcise them, through mysterious sounds made of wind instruments and harrowing screams of monkeys which I recorded in the forests of Guatemala.

The conclusion track, “Out of Grid,” is a long and completely rhythmless piece to express the exit of the patterns. Now we are an ethereal dimension, outside the matrix that took hold of us us. Rhythm, refrains can be interpreted as a mathematical function, and I do not want any reference here. and who knows .... maybe it's better to go back where you are safe? ;-)

Although they teach us that the body is a machine with a simple motor and the DNA is a fixed fact that takes you from birth, experiences modify each of us in a subjective way and also transmit DNA. For some Atavic fear can be a trace from dance in the disco with a smile on the mouth, while for others it is distressing, as it might be distressing to go out of grid to a person used to patterns.

This is the experience that we carry inside, if you perceive uneasiness it is because you are restless.