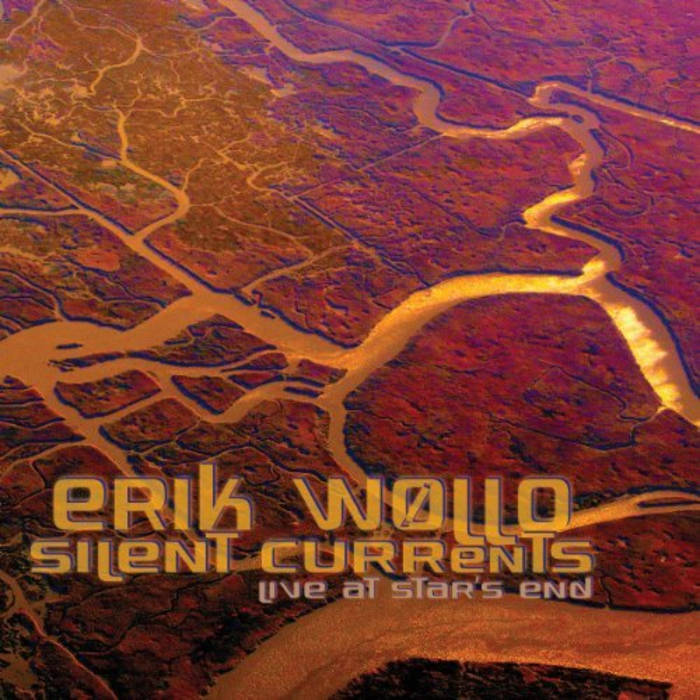 The 2-CD Silent Currents showcases a different side of Erik Wøllo's sound. Here he explores fascinating electronic / ambient landscapes with slow-motion structures, surreal soundscapes and floating currents. Drawn from two separate live radio broadcasts, 104 minutes of music traverse a more ambient, atmospheric and textural side than experienced on his other albums. Recorded in the studio of the famous Star's End radio show in Philadelphia, these performances from 2002 and 2007 are each a disc-long continuous piece with several chapters. With more focus on the deep drones than on melody and rhythm, zones drift and morph, organically flowing into each other. Layers of electronics and processed sound combine with light touches of electric guitar melody floating on top. Quiet, sparse and gentle electronic music with ambient passages mix with occasions of sequencer pulses.

Silent Currents is the 15th release from the Norwegian guitarist, synthesist and composer following his successful 2010 Projekt release, Gateway. In June, Wøllo released The Road Eternal collaboration with Steve Roach succeeding their 2009 joint effort, Stream of Thought; both essential albums in the electronic genre introduced a new audience to Wøllo's personal signature of introspective atmospherics.

Star’s End is one of the longest-running radio programs of ambient music in the world. Since 1976, this show has provided the Philadelphia broadcast area with weekly midnight musical adventures. Erik says, “I have been kindly invited to perform at Star's End multiple times. To perform 'on the air' late at night in the radio studio contributed to these unique and inspired performances. In this setting, it felt very natural to do some downtempo and quiet, floating ambient music. Thus, this release is more abstract and chilled out than I usually present on my studio albums. Some elements of the music was improvised; I brought various sound excerpts, loops and atmospheres, and performed and composed these into long continuous zones, all done in real time."

Chuck Van Zyl, host of Star's End adds, "Over the years Star's End has hosted many live to air concerts, usually with artists fresh from The Gatherings Concert Series stage. The act of playing a second, more intimate concert after a public event provides a sense of summation to a powerful experience. But the unique radio venue also offers musicians a space for discovery, as they turn from focused music for The Gatherings community to atmospheres for an audience each in their own dream space. Erik Wøllo enthusiastically embraces this idea using his on-air concerts to explore moods and zones only found in the late hour and unconventional situation. There is an interesting energy arcing through Silent Currents: Erik descends into himself, realizing music completely in the moment. The resulting new works are wonderful expressions of ambience, texture and this artist's potent sense of drama as Wøllo creates space, then fills it with ever-evolving sound."

With his focus on the deep drones and interwoven ambient tributaries, Wøllo creates a vivid soundtrack for the senses, taking the listener to the outer reaches of the imagination. Impressionistic electronic / ambient music at its best! Relax and float on the Silent Currents.