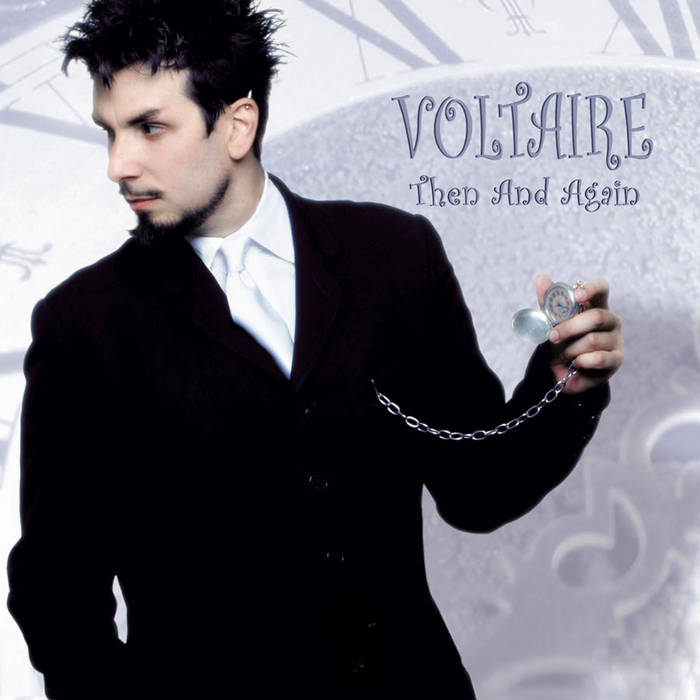 THE DEVIL TAKES A HOLIDAY

Known for his dark humor, Voltaire temporarily hangs up his horns on Then And Again, nine gorgeous songs of love lost where no one gets beheaded! This is the album that turns your parents into Voltaire fans! Serious, heartfelt and mature, Voltaire shows his versatility as an artist.

Years before Voltaire cemented himself as a master of cynicism and dark humor with his debut CD, The Devil’s Bris (“When You’re Evil,””Ex Lover’s Lover,” etc), his material was of a decidedly more serious nature. In the early nineties, Voltaire wrote songs of lost love (“The Happy Song,” “Believe,” and “Wall Of Pride”). However, he hadn’t yet discovered the joys of writing vengeful murder ballads. Ditties about seeking revenge on those who had hurt him by chopping them to bits wouldn’t happen until just before his debut release in 1998. Upon the release of Bris, he found an audience for his special brand of dark sarcasm and thus found it easy to focus on writing material of that nature. He says, “I am by nature a sarcastic bastard, so naturally that’s going to come across in my songs.” And thus Voltaire came to be known as the spooky guy who wrote dark yet humorous songs of betrayal and revenge.

“But nobody is one-dimensional,” says Voltaire. “ we are all multi faceted beings so of course I’m going to write material that reflects other mindsets and moods.” His albums have always reflected that by having a balance of the humorous, the poignant, as well as the heartfelt. But by his third release (Boo Hoo) he had come full circle. “I was writing more and more serious material and I felt Boo Hoo was in danger of becoming off balanced. It was then that I decided that my next two Cds would be divided into the serious and the humorous, the comedic and the tragic.”

While his next LP, Ookie Spookie is marked to be “an over-the-top exercise in dark humor,” Then And Again is just the opposite. This is the seldom seen serious side of Voltaire, a collection of nine songs that span more than a decade. “Life is cyclical,” says Voltaire, “so I guess it’s no surprise that I have returned to some of the same themes I was writing about ten years ago”. Then And Again contains songs from as far back as 1990 and is complimented by new songs in a similar theme and style. The timeless quality of Voltaire’s music is highlighted, as the earliest songs on the album are as fresh and relevant today as they would have been ten years ago.

Moreover, fatherhood has given Voltaire a greater breadth of subject matter as is seen on the more recent tracks (“Crusade”- a poignant anti-war message from a father to his son, “Goodnight Demonslayer” – a spooky lullaby that warns a child about humanity and “Born Bad”- a death-row inmate’s pleas to see his mother again.)

This is the disc that will turn your parents into Voltaire fans! Lend it to them and see, just don’t expect to get it back.

Now and again Voltaire writes songs that don’t involve beheadings, necrophilia or seeking revenge on ex-lovers. Though best known for his dark humor, Voltaire temporarily hangs up his horns on Then And Again and demonstrates his versatility and tremendous staying power as an artist with a collection of songs that is serious, heartfelt and mature,
Fill the tub, light some candles, sit back and enjoy.