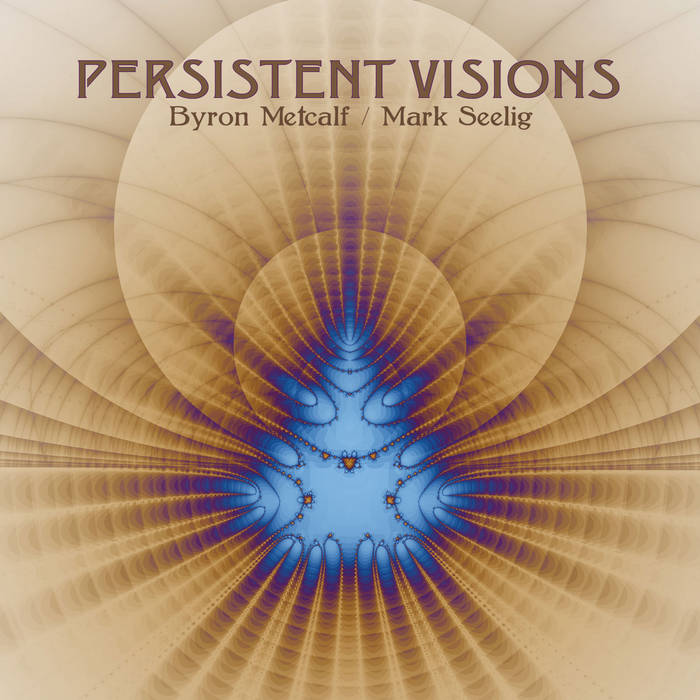 George Henry One day, I was feeling very black-pilled about my life. Listening to this music reversed my depression in a few minutes and inspired me to take action to reverse, or at least ameliorate, the situation(s) that had led to my feeling down - which turned out to be very much the right thing to do.

This Bandcamp download includes the full album as one long piece, as well as cue points for the six individual “Visions.”

European customers. Save on postage, and get faster delivery by Ordering from our German webstore:
deejaydead.de/en/new-releases/byron-metcalf-mark-seelig-persistent-visions-cd-digipack-2019


Persistent Visions is a 70-minute heart-centered sonic meditation from veteran transformative shamanic practitioners Byron Metcalf and Mark Seelig. Designed for a continuous, uninterrupted listening experience that slowly evolves and builds with increasing tempo and dynamic complexity, Persistent Visions consists of six parts (visions). As seamless blending parts of a singular composition, these visions invite an expanding consciousness to find its way into a ecstatically blissful and oceanic completion.

Four years after their last collaborative masterwork Intention, these two kindred musical spirits merge their meditational music talents to guide both veteran meditators and adventurous newcomers on a soul-immersive path towards beauty and tranquility.

Byron’s superbly crafted meditative rhythms and patterns create a neural and sensory awareness of body and soul. Mark’s bamboo (bansuri) flute performance is based on two classic Indian ragas that are beautiful and haunting and at times celebratory.

From the dawn of history, spiritual seekers have relied upon visions for guidance, clarity, inspiration and more. Meditation, prayer, drumming, trance-inducing music, shamanic journeying, vision quests, ecstatic dance, and the ritual use of psychedelic plants and substances are some common approaches to the visionary experience. This album is a powerful support tool for extended meditation practices, massage and body work, entheogenic and empathogenic exploration, and any practice that is intended to reveal the Truth of one’s experience and life circumstances. Once the revelation of that Truth is recognized, the essential nature of persistence assumes the guiding role of an internal pathfinder.

These seasoned veterans of shamanic and meditational music create a stunning recording that facilitates the unfolding nature of the visionary experience, and an alignment with the inner regions of the listener’s heart – an experience of balance and a deep sense of peace and calm.