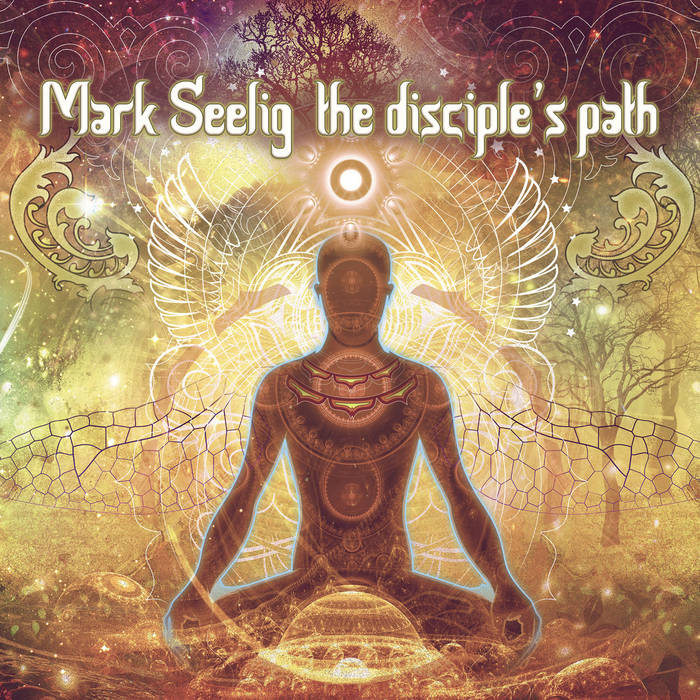 hrux This is such a wonderful album. The first raga always carries me away and leaves me with this awe and honour and gratitude for all the beautiful things in life. Such a heartful salutation for all the feminine, the great mother, the beloved one. Favorite track: raga princess.

Mark Seelig’s ambient-organic THE DISCIPLE’S PATH follows upon the passionate deep sonic enchantment of his previous DISCIPLE (Projekt, 2010). After years of collaborations with Steve Roach, Byron Metcalf and Loren Nerell, Seelig returns to his solo work on this unique, engaging medicine music. Steeped in traditional Indian Ragas, the sultry ambient washes and occasional entrancing rhythms form the backdrop for Mark’s organic and intimate Bansuri flute melodies. Potent and seductive, the pieces venture to the frontiers of consciousness, animating the 78 minutes of music with an inviting enticement into dimensions of the beyond.

“The vision,” Mark explains, “is to honor life in general and to specifically pay reverence to all people immersed in ancient wisdom traditions of the world. As a student and practitioner of shamanic healing teachings, I am curious to learn from them and fascinated with finding musical expression of their mystique."

"In troubled times, disciples of all kinds search for ways to understand current challenges and implement what they learn on their path to help create a healthy and conscientious way of living together with creation. Indian Ragas are deeply rooted in one of these ancient wisdom teachings. The pieces on this album reflect a musical journey that casts a bridge from indigenous traditions to the current world, as another disciple pursues the path…”

From a previous Textura review: Seelig “…plays with admirable humility. Never in his playing is there any hint of ego indulgence; on the contrary, his every expression seems tailored to strengthen the total musical effect, and the aromatic quality and haunting tone of the flute is consistently reinforced by the expansive backdrop.”

Over four tracks — the shortest running a touch over ten minutes and the longest 36 minutes — the mind is engaged and entranced by Bansuri flute, dilruba (Indian cello), electronic violin, harmonic chants, soundscapes, percussion, and drones.


1 raga princess
… is based on elements of one of the most profound and revered Ragas in Indian classical music. I say ‘elements,’ as I would not claim the ability to even marginally explore the full depth of this particular Raga. But the ‘feel’ comes across. It’s deeply reverent, and I call it ‘Raga Princess’ to honor the divine feminine as it appears in all its forms for us. As a husband, I feel deeply indebted to, and in love with, my amazing wife Gabi, so this Raga is for her.

2 ya-man
… is a simple but deep and relaxed exploration of the main themes of Raga Yaman. It’s a melody that consists of only full notes, no half notes, so it appears easy to learn and play. That said, what’s called the ‘Ma Tivra’ in Indian music lends a particular and beautifully haunting energy to this Raga.

3 the disciple’s path
…takes ample time to expand into a meditative taste of Raga Bhoopali and then veers off into free improvisation, breaking all laws of Indian Raga. If you are familiar with that special deep-meditation feeling of never wanting a certain song to end, then this one is still too short. But the idea was to have it go on for these 36 minutes and keep a steady space of silence between the notes.

4 raga ayahuasca
The search of a disciple leads to explorations that go far beyond the confines of the mind… This track honors one of the most powerfully loving and insightful sacred plants that has been used ritually for thousands of years by native South American culture. The visions it gives have the beauty of Raga, the bliss it brings have the depth of Raga, the darkness it teaches about have the wildness of Raga…

After over 15 years of collaborations with Steve Roach, Byron Metcalf, and Loren Nerell (resulting in 16 albums including his 2019 PERSISTENT VISIONS collaboration with Metcalf), Mark has developed a wide body of diverse recorded work.

Music is his second life following 30 years as a clinical psychotherapist. The influence of Asian mysticism and spirituality, South American ceremonial rituals, and the musical traditions of India worked their magic on his life in many humbling ways. Classically trained as a child on violin and self-taught on guitar, in 1999 at age 42 his musical focus shifted again: during a deep vision quest, he felt encouraged to take up the North Indian bamboo Bansuri flute. This was a rather late age for picking up a new instrument, yet he took the plunge; for 10 years he studied as a disciple of Indian Bansuri maestro R.K. Bikramjit Singh.

In his work as a clinical psychotherapist and in private practice, Mark embraces the approaches of Indigenous Ceremonial Traditions and Transpersonal Psychotherapy, utilizing music to create a setting for meditation and healing. Facilitating breathwork and shamanic rituals to induce expanded states of consciousness, Mark offers his musical compositions as a guiding element to support people’s inner explorations.