Scenes from a Ghost Train 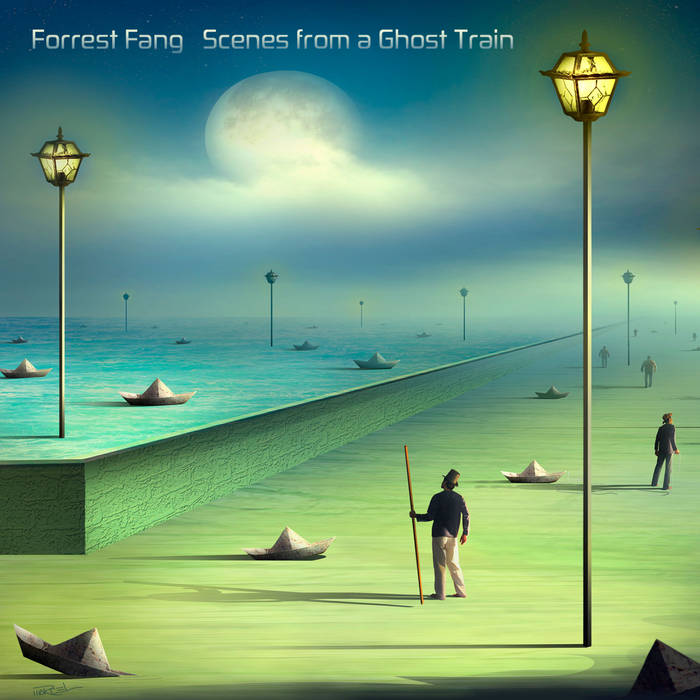 Scott Slightly spooky ambience...like exploring strange but wondrous fog-shrouded places around the world and beyond.

rikm Forrest Fang's amazing ability to create sonic worlds and strike expressive moods is in full display on this release, an impressive collection of pieces that highlight Fang's considerable talents and skills.

nss379 Can't wait to listen...I look forward to these more than movies these days.

Frank Inzan Owen (Hidden Mountain) Forrest's music always feels like sonic maps of deep ancestral landscapes and parallel realities not yet explored. This 'map' is haunting; a blend of sensory wonderment, lush vistas, ancient cities cloaked in foliage, reverberating with joy, renewal, mystery, with occasional traces of heartbreak. The 20-minute track entitled "The Great Migration" is a powerful passage of spinning sparks and movement. It felt like a heroic dose of the cosmos in a teacup. Favorite track: The Great Migration.

Spanning sixteen solo albums over three decades, Forrest Fang’s electronic creations are a surrealist blend of processed ethnic instruments and minimalist, ambient soundscapes. Scenes from a Ghost Train combines these elements “into a fusion that resists the stereotype of the term,” KQED’s Ned Raggett writes. “Fang’s work creates an enveloping flow of rich sound and understated experimentation. It doesn’t sound like one specific style, nor a mix of them all at once — but something distinctly his own.”

Exposé Magazine adds, “The shimmering textures are created via walls of processed acoustic sounds with synthesizers supporting, with or without percussion, and then often the melody instruments emerge out of this fog, first subtly and then boldly, carrying each piece forward. At certain points the textures may subside and expose the melodic content to a greater degree as a way of achieving a more powerful dynamic. Melodies within the mist tend to be minimalist and somewhat cyclical in nature, garnering a strong and evident emotional content that is at once fresh, pervasive and dreamlike, much like a weightless walk through an limitless garden.”

Fang’s latest Projekt release, Scenes from a Ghost Train, finds its inspiration in the phantom train of urban folklore that appears and disappears without a trace. “For me,” Fang reflects, “the ghost train is a projection of the human imagination that merges fantastical ideas, thoughts and mental images with the physical environment to create its own alternate space, much like I what try to realize in my own music.”

The album opens with a four-part eponymous suite. “Five-Mile Crater” begins with a percolating rhythm derived from the sound of a stalactite that is soon complemented by a celestial bed of warm choral tones and abstract sounds. The atmospheric “Koch’s Veil” follows, juxtaposing a contemplative piano with long, sustained string tones. The final two tracks of the suite, “A Meeting of Totems” and “The Pulse of the Stars”, reflect Fang’s distinctive and polyrhythmic ethno-ambient style and feature the woodwinds of Dave Newhouse of the well-known progressive band, The Muffins, as well as Fang’s expressive violin.

The mysterious resonating tones of “Nocturum” provide a brief ambient interlude before proceeding to “Freefall,” a gamelan-influenced piece featuring the processed sound of a Javanese metallophone, the saron. The peaceful and reflective drift of Fang’s ten-minute ambient piece “Enfolding” follows. The contemplative mood continues with “The Great Migration,” a piece of subtle power that builds gradually through layered and intertwined synthesizers, plucked strings and saron. The ghost train brings us back to earth with “Waning Crescent,” a vapor trail of electronic tones and the familiar sound of an electric piano.

The engulfing electronic elements and ethnic instruments paint a unique landscape for listeners to lose themselves in and explore. Scenes from a Ghost Train is a phantasmic world where thoughts and visions from interior and exterior worlds converge