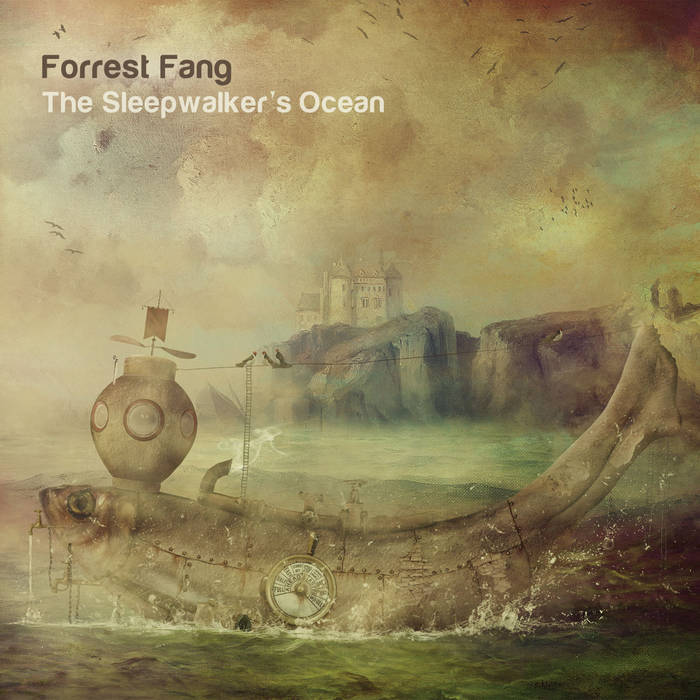 Each of his albums has a particular charm and appeal, but if pressed I would suggest that "The Sleepwalker's Ocean" is a particularly high spot in his catalog, taking the listener on a fantastic musical journey, a trip through undiscovered soundscapes and new musical horizons.

It's a trip that's well worth taking if you haven't already...

AJH Wow. Reminiscent of Fax recordings from the 90's, with the addition of thoughtful natural tones. The hall reverbs make you feel like you are inside a vast hall that contains all the universe both inside and outside of time. Top 5 favorite ambient albums ever. Excellent work!

patient_ot Epic deep ambient with great use of texture and subtle integration of acoustic instruments. Very well done all around.

Sandra Barnes if you want to space out and relax this album is perfect. love it.

Forrest Fang’s 2015 THE SLEEPWALKER’S OCEAN was his first 2CD studio album. It’s a hypnotic deep-ambient exploration of the fantastical and elusive realm of the subconscious. Fang gave free reign to his intuitive and instinctual side allowing the sonic landscape to drift into his interior world of elusive and impressionistic thoughts and images.

“To me,” Fang says, “the ocean is not only a symbol of emptiness and space, but also one of unknown depth and mystery. It is much like a dream that seems so real and vast yet is formless because it originates in the mind. For this release, I took a more open-ended approach, allowing in more spontaneous sonic ‘accidents’ and textures, especially on my first long-form piece, ‘An Alternate Ocean (The Salton Sea).’ The layered soundscape of my ‘ocean,’ populated with these accidental characters, ebbs and flows in a vast imaginary sonambulent space.”

While Fang embraces the American minimalists and the ambient soundscapes of his contemporaries, he also draws on the gentle percussive textures of Javanese gamelan and on pentatonic scales used in traditional Asian music. Besides using violin, electric mandolin, electric guitar, keyboards and various textural treatments to create complex layers of sound, Fang also plays lesser-known instruments such as Marxolin, saron (Javanese gamelan), and lavta (Turkish lute). Robert Rich contributes his otherworldly flutes to “Message In The Sand” and mastered the release.

The album opens with “Gone To Ground,” a spacey, multi-layered electronic track that combines tape-delayed violins and lavta with an unfurling ostinato of interlocking synthesizer parts. The second track, “Message In The Sand,” emerges from a relaxed ambient bed of sustained keyboards and electric guitar to form a cross-cultural rhythmic gumbo of saron (Javanese gamelan), bamboo flutes and cántaro (Mexican clay pot). Next is the album’s centerpiece, “The Sleepwalker’s Ocean,” a six-part ambient suite which travels from primal intensity to radiant placidity—moving through rain clouds, a thickened bog, a nocturnal ferry and a luminescent band of light. In this universe, a gamelan shares space with the familiar sounds of a mellotron, and a virtual Geiger counter shares space with an angelic organ. The first disc concludes with the contemplative and bell-like soundscapes of “Driftwood” and “Not Forgotten.”

The album continues on the second disc with a single long-form electronic track, “An Alternate Ocean (The Salton Sea).” This 54-minute piece offers an alternative view of the imaginary ocean suggested in the title track. The “ocean” is more sustained and celestial than its cousin with an inward focus and a hint of Asian influence that brings the album to a state of quiet repose. For Fang, this extended piece “gave me the chance to realize my virtual world on a larger and more organic scale.”